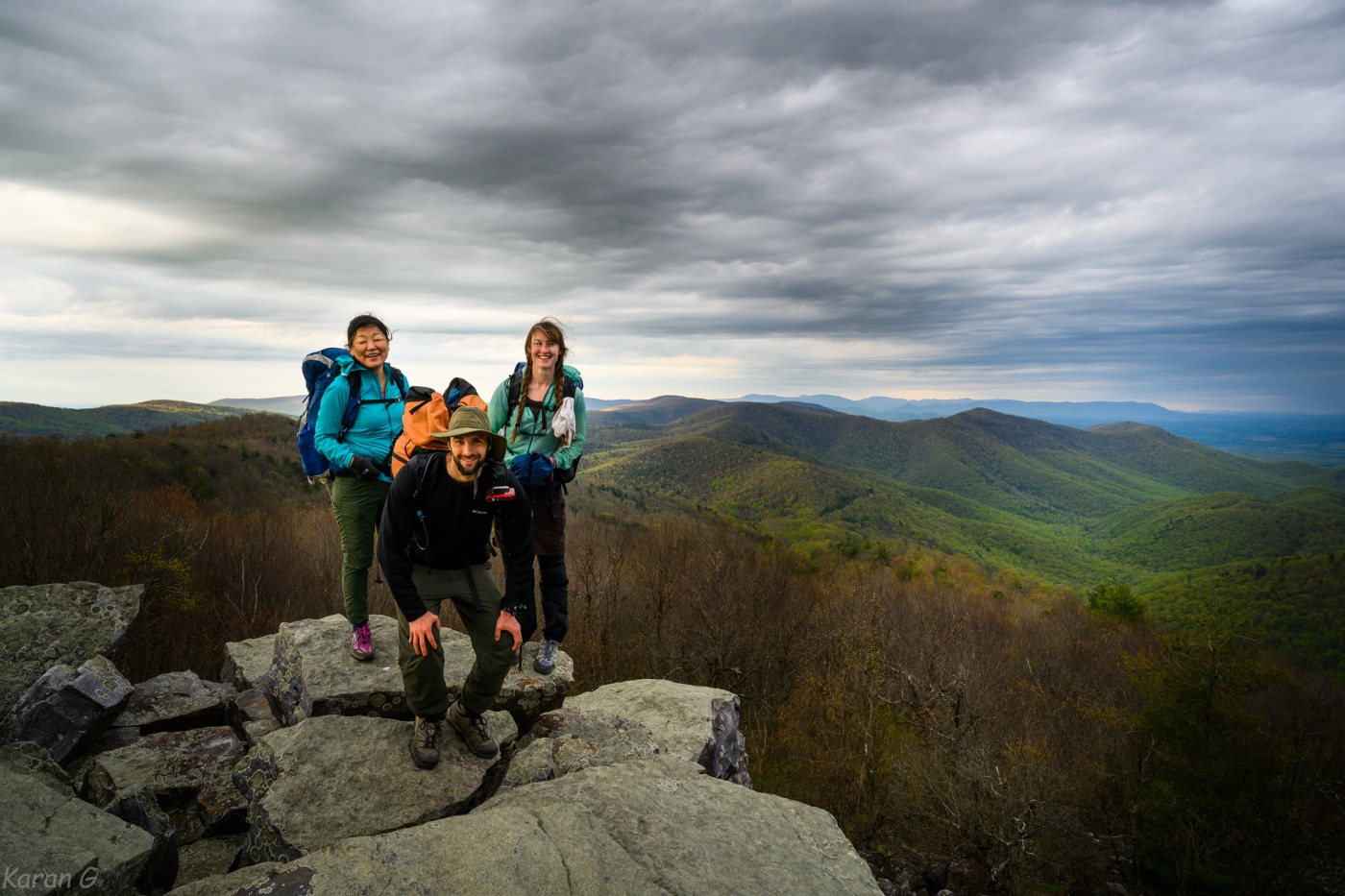 On Saturday morning, Karan and I met Bryan and Christi in Courthouse since the orange line was not running and then picked up Sophie in Vienna. We arrived at Brown Mountain Overlook around 10:45 a.m. It was a beautiful sunny day with temperatures in the 50s but the wind was fierce. We headed down and then up the Brown Mountain Trail to a nice overlook. Along the way, we saw the effect that the winter and spring weather had on the trail. There were a few downed trees but it looked like lots more blowdown had already been cleared.

We wound our way down the endless switchbacks towards Big Run, where we stopped for a lunch break around 1 p.m. From there it was a long, gentle but rocky climb up towards Rocky Top. After a brief break, we continued a couple more miles along the ridge and then dropped down to Madison Run. While waiting for the group to gather, we entertained ourselves by throwing stones at different targets.

It was around 6 p.m. when we started up the Furnace Mountain Trail. The blue skies we had earlier gave way to clouds, dampening our chances of a good sunset. By the time we finished the climb, it was getting dark. We all made it to Blackrock Shelter around 8:30 p.m. to find it packed. Christi, Sophie, and Bryan managed to set up on less than ideal “campsites” while Karan and I took the top bunks in the shelter. It was around 10pm by the time we settled in for the night.

Wake up call was at 6 a.m., at least for those of us who weren’t already awakened by the whippoorwill. We started up the trail at 7 a.m. and managed to catch nice light on the mountains at Blackrock Mountain before dark clouds rolled in and it started to drizzle. Some of us enjoyed the cooler weather that the clouds brought in. We hiked straight north on the AT until we ran into Gen, who came out for a trail run and the hike back to the cars. The weather kept changing its mind–the sun would come out strong for a little while and then suddenly the whole sky would cloud over.

Eventually, we popped out at the Ivy Creek Overlook and walked the road back to our cars. There we discovered that Christi had a tick (which we later successfully removed) and Bryan left his keys behind (but luckily realized it before we got too far). For our post-hike meal, we stopped at Grill 309 in Culpepper.

This was a great loop although in the future we might try to avoid taking our chances at an AT shelter during the busy season.