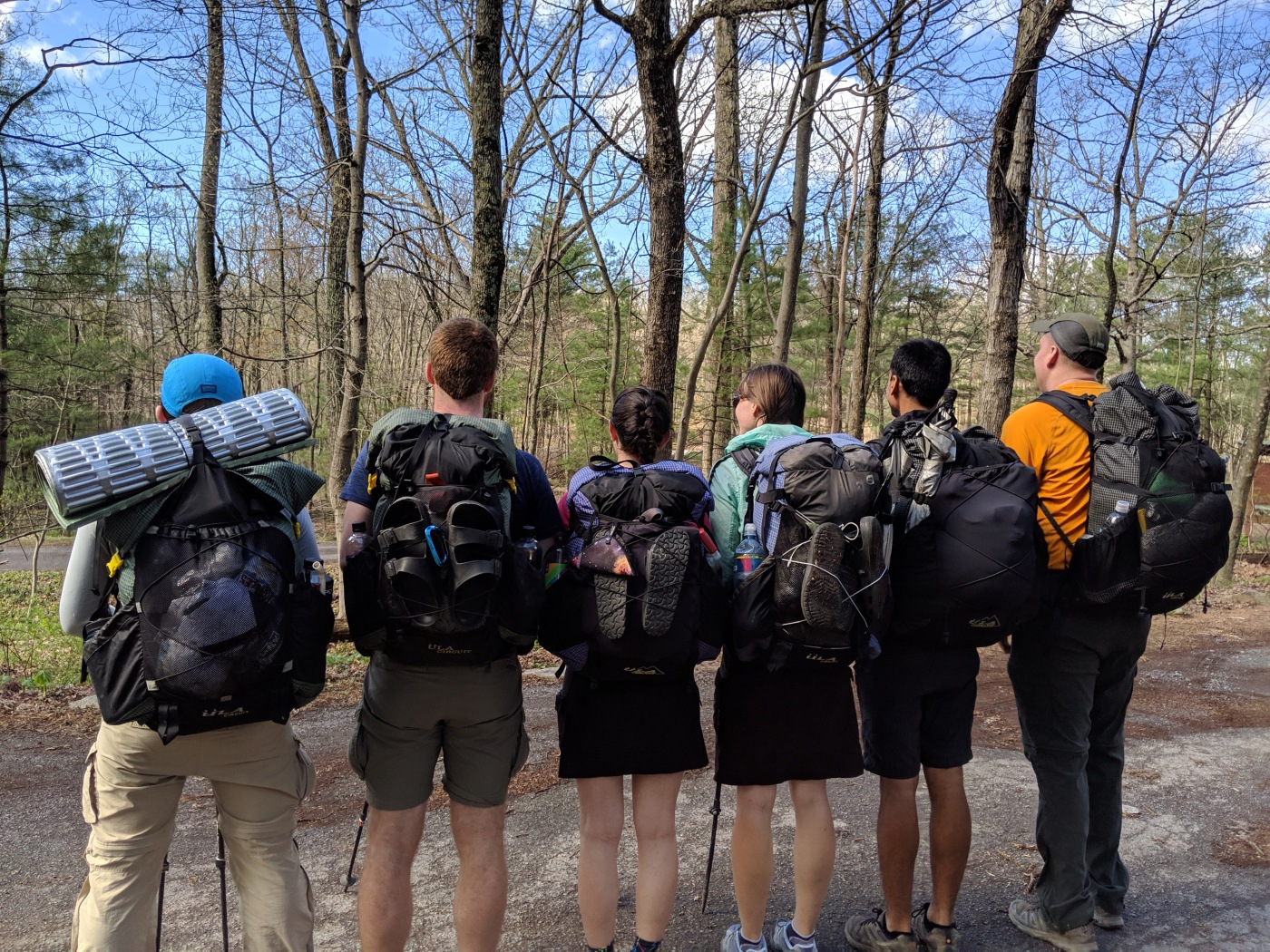 Fresh off our overseas hiking adventures, Karan and I decided post a trip neither of us had yet completed: the Trout Run Valley Circumnavigation. We picked up Heavy D in Courthouse and then met Sophie, Jeremy, Ashley and Crusher at Vienna on Saturday morning. We were surprised to also see Michael there. Apparently, he was supposed to be leading a Capital Hiking Club trip that was canceled due to bus problems but graciously offered us some of the beer in his trunk.

We met Chris and Brian Crowe at the Wolf Gap parking lot around 10:15 AM. The six out of nine of us who had color coordinated ULA packs lined up for a picture and then we took off from the parking lot shortly thereafter. The weather was perfect (60s and sunny) as the group sweated our way up Tibet Knob. After enjoying the clear view, we continued along the ridge and met up with road. It was past noon when we met back up with the proper trail and stopped for lunch. The afternoon sun was relentless and unfortunately, almost everyone forgot to bring sunscreen. Crusher, the only one who had it, still got just as burnt as the rest of us.

We paused for another break near the trail’s intersection with Trout Run Road. The last few miles to camp seemed to pass slowly compared to the breezy hiking earlier in the day. We arrived at Halfmoon Run around 5:30 PM and everyone stuck their beers in the stream to cool while we set up camp. There were a few other backpackers there, some of whom had already started gathering firewood. It was a breezy evening with a few drops of rain but pleasant overall.

Wake up call was at 6:30 AM. Several people remarked that the moon was so bright during the night, they had thought it was already dawn. Everyone was packed up and on the trail around 7:30 AM. It was slightly chilly but we warmed up on the climb out of camp. We decided add on the out-and-back to Halfmoon Mountain (which everyone agreed was 0.8 miles, not 1 mile as marked). Ashley’s foot injury was acting up so she and Crusher went ahead to save some time. The rest of the group carried on along the ridge, which was not too muddy considering the recent rain. The springs were flowing well though.

Most of us regrouped at Big Schloss where we lucked out with another day of clear views. On the descent, we passed many people headed up. By 1:30 PM everyone was back at the parking lot. Jeremy determined that Jalisco’s in Strasburg was open despite it being Easter so we went there for our post-hike meal.

Overall, this trip was a nice welcome back to the mid-Atlantic mountains. It was great to catch up with so many friendly faces and enjoy the fantastic spring weather! Let’s remember the sunscreen next time 🙂

Check out that greenery in the Sods! 😲⁠
#TripTuesday takes us back to summer fun in #ShenandoahNationalPark in 2019.⁠
Link in profile: WFA scholarships, gear for sale, goodbye to @evankmccarthy! #dculbackpacking #ultralightbackpacking
Oh Dolly Sods, how we love thee!⁠
The views that make it all worth it.⁠
A few weeks ago on the #LoyalsockTrail.⁠