DCUL is out on the Trout Run loop every few months – it’s not too far a drive, there’s flexibility in how to manage the splits, you can have campfires, there are great views and plentiful water sources… all the makings of a classic. This sort of loop doesn’t get stale, but nevertheless we wanted to spice it up this time around and celebrate Halloween on trail in style and in costume.

Saturday morning, we piled into 3 cars and drove from Vienna to Wolf Gap Campground after a quick stop at Sheetz. The parking lot was already packed – we weren’t the only ones enjoying the gorgeous fall weather this weekend. We crossed the road and headed south on Tibbet Knob Trail. The trees had lost enough leaves that we got really great views off to the east. The dayhikers seemed disappointingly uninterested in our costumes.

We regrouped at the Tibbet Knob Trailhead and started the road walk. It passed quickly, and we enjoyed a late lunch break in the sun right where we rejoined the trail. Erik caught up to us (he’d gotten in to the parking lot a bit later than the rest of us), and we all showed off our costumes: we had a chef, a flower seller, Han Solo, a moose, a fox, a “I’m not a deer don’t shoot me,” Dora the Explorer, a ninja, Forrest Gump, a Charlie Brown style ghost, and Dmitri who just kept saying “you’ll see in camp.”

Heading north on the Crack Whip Trail, there were plenty of water sources but the footing was a bit tricky with so many leaves covering the rocks. After a leisurely snack break, we ran into a group of PATC volunteers who had just done a lot of good, hard work breaking up rocks along the section of trail we’d just traveled. They waved us over and were interested in chatting, although they seemed a bit surprised and concerned that we were still hiking at 4pm, and in such a large group. We reassured them that we were prepared for the cold weather and weren’t concerned about getting to camp in time. Indeed, shortly after 5pm we descended the last slope and crossed the bridge over Trout Run, pulling into a large established campsite to the left of the trail, tucked in between the river and a fire road. 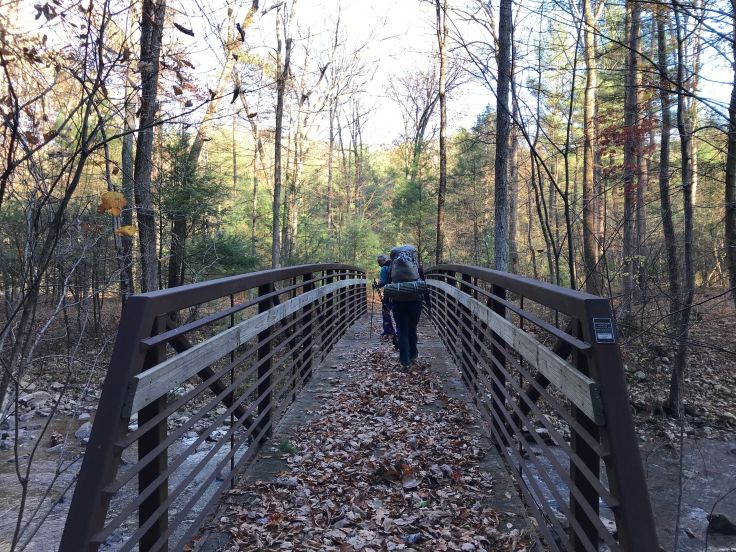 At camp, we alternately pulled on our costumes and pulled on layers that covered up our costumes, ruining any chances for a decent group photo. Some costumes were scarier than others. People rose admirably to the “Halloween treats” part of the challenge, and our campfire was accompanied by a selection of beer, whiskies, and candy. The night was clear, and some people stayed up appreciating the fire and stars until *actual* (not just hiker) midnight.

I gave the wakeup call at 6am the next morning, enjoying the extra hour of sleep and the pre-dawn light at such an early hour, confirming that my phone does indeed reset for daylight savings time while on airplane mode. Despite the extra sleep, we were all a bit slow packing up, finally rolling out of camp between 7:15 and 7:30am.  The trail was well blazed through all the campground loops and small junctions, but it was sometimes a bit tricky to make sure we were following the right blazes each time.

At the junction with Halfmoon Lookout Trail, I stopped to make sure everyone made the turn okay (case in point: both trails were blazed yellow at this junction). Pat wasn’t feeling great, but since we were less than a mile from a road junction, we decided it was smarter for him to hike out to the road and cut the day short rather than risk starting to feel worse over the next 9 miles. After triple checking our maps and the plan, I started climbing Halfmoon Mountain to rejoin the rest of the group.

Most people were waiting at the junction with the lookout side trail;  unfortunately, Kylie did not find her lost shoe from the spring. Before long, the full group had re-coalesced, just in time to split up again as people decided whether or not to visit Big Schloss. Karan scaled it from the north; Kylie, Erik, Mark, Jeremy, and I grumbled but followed the trail all the way around; and the rest of the group decided to skip it. The last time I was in the area, I couldn’t even see the rock outcropping from the trail – the views this time were a treat!

The top of Big Schloss was crowded with lots of people, all decked out in blaze orange. Mark fit right in! From there, it was easy going back down to the cars. We ran a quick mission to go pick up Pat, who was fortunately feeling much better, and drove out to Woodstock Brew House for a celebratory meal. Happy Halloween from DCUL’ers on the trail!