Six of us met at the Vienna metro at 5 PM and eagerly filed into two, nearly identical Suburus. We stopped at Sheetz #198 for beer, dinner, and more beer just in case the first lot wasn’t enough. We met Maria, who arrived separately in her Jeep at Wolf Gap Recreation Area. Many introductions were had and bags unpacked. Aileen and Alex found spots for their shelters in the overflow site, also known as the day-use area, as all of the designated campsites were occupied when we arrived. Ginny and Ian set up their triplex by a fellow backpacker who too arrived too late to snag a designated campsite. Pat, Maria, and Stan committed to sleeping in their respective cars. Before hitting the hay, most of the group bonded over a six-pack of beer in the parking lot. At both three and four a.m., we all — meaning all the campers at Wolf Gap — had the opportunity to be totally confused by a group racing around the camp in a truck, clamoring on in gibberish. It may have been something about extra pizza. Clearly we could not receive this group’s message, no matter that it was loud enough to wake each of us, even those sleeping soundly in their cars. 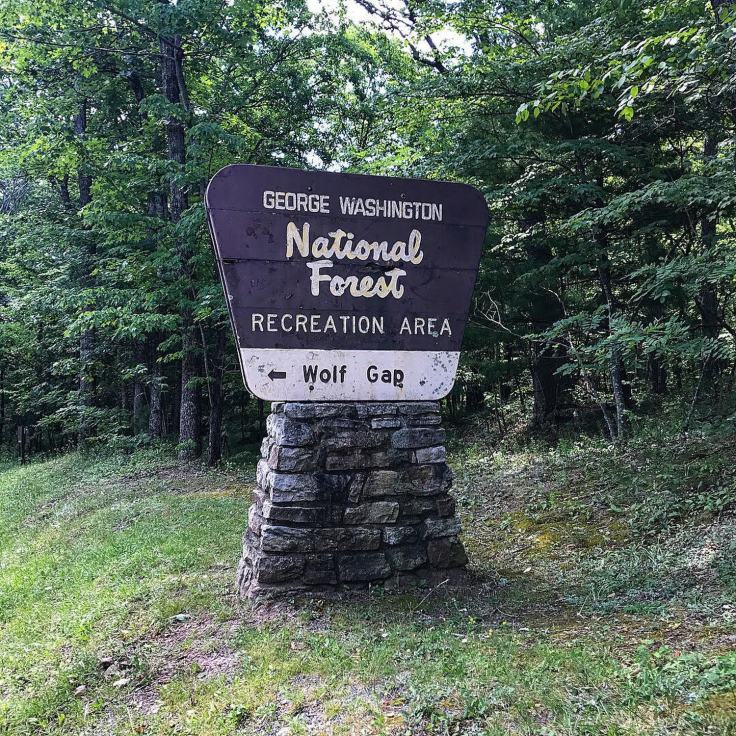 We woke up around 6, briefed, and began the ascent up the orange-blazed Mill Mountain Trail. This shot us up to the Big Schloss Spur Trail, which let out to a highly-promised 270-degree view of the Trout Run Valley. Up top is a fairly new wooden bridge that carries you to the castle-white sandstone outcropping. Tragically, visibility was just about far enough to get a sense of where the outcropping ended. Without much to look at but Aileen’s rad new shoes that reminisced us with their 90s-vaporwave aesthetic, we returned to the Mill Mountain Trail. We continued on to the Tuscarora Trail, running into three friendly PATC folks in the midst of some well-appreciated trail maintenance. We dropped out gear at the start of the Halfmoon Lookout Spur. A quick half-mile trek to the vista and another opportunity to admire Aileen’s shoes. Again, think super 90s. Velcro. The purple and teal waves of Jazz solo cups. And although we could not deny the feelings that Aileen’s shoes made us feel, by this time in the day we were also presented with a peek at the valley as the dense fog had partially lifted.

After descending the Halfmoon Trail we arrived at a sore-looking stream by a Takoma taking up the better half of an attractive campsite. It was at this spot that the group took 20 minutes for lunch and shared their appreciation for pickup trucks. We continued down the Bucktail Connector trail, with all of its thickets and grassy meadows, until we reached Trout Run Road. From there, we picked up the Long Mountain Trail, which remained under our feet until we reached camp in the shadow of Ben’s Hill. Within 15 minutes of our arrival — just enough time to set up our shelters and settle in — a thunderstorm busted over top of us. Fortunately, the storm passed within an hour. After everything settled, Alex and Pat went to check the water situation only to come back with bad news: our main source of water had seemingly dried up. While Pat followed the empty riverbed upstream, Alex, Ginny, and Maria set their masts towards a nearby pond in hopes of finding what was feeding it. Both parties of explorers came back with water in tow, and all was saved. Best yet, Ian and Stan had gotten a fire going, which lasted until the remaining few called it a night.

In the morning, we challenged DC UL’s norms and stayed in camp until 7:30 AM, giving Ginny and Ian time for a couple cups of hot coffee and the rest of us more time for breakfast. Our first length of the trail was the remaining bit of the Long Mountain Trail, including the ascent of Devil’s Hole Mountain. Within an hour of the top of this small mountain, we turned onto Forest Road 691. A leisurely walk down the road and we came upon the Tibbet Knob Trail. The trail was rocky and overgrown and totally beautiful, wrapping us up and around the mountain until we reached the lookout. Another pair of campers had just finished up their breakfast on the outcropping when we arrived. A tender scrape and buttslide down the far face of the knob dropped us onto a gentler trail. Not long after, we arrived back at our cars. We found no water sources on Sunday, but finished up quickly enough that it wasn’t an issue. On our way home from the hike, most of the group was able to sit down together one last time over beer, burgers, and Bavarian pretzels at Woodstock Brewery.

All in all, a splendid trip with lovely people.