In preparation for an upcoming (grueling) trip to the Wonderland Trail, I scheduled a training hike with lots of climbs in Shenandoah. I anticipated steamy, hot temperatures; lots of biting insects and ticks; and plenty of stinging nettles on overgrown trails in (relatively) less frequented areas of the park. Given that description, Karan and Kyle decided they couldn’t miss out.

We left Courthouse at 6pm on Friday, and made it to an almost entirely empty Old Rag Parking lot by 8:15pm where we met up with Kate (she’d be camping with us Fri night but continuing on for her own hike that weekend). After remarking on how much fuller the lot would be when we returned on Sunday, we headed out along Nicholson Hollow Trail to find a campsite for the night.

Fortunately, other than passing two guys and their dog that we’d met in the parking lot, we didn’t see anyone else out there and had our pick of sites. We stayed up late chatting, taking cool photos of tents in the dark, and deciding not to eat the berries we’d found on bushes nearby.

It was a warm, still evening, and we were up by 6am on Saturday (Kate had already left camp to get an early start on Old Rag). Our first climb of the day was Hot-Short, about 1500′ in 2 miles. Karan and I were in just the right place at the right time to see the top third of a huge dead tree topple over and fall with a giant crash – lucky it wasn’t on the trail!

We were all sweating buckets by the time we got to the top, which was a pretty good signal of what was left to come. The goal was to set up camp early to claim a site and continue on for the second half of the day, but instead of heading there directly we did a full loop around Hazel Mtn to get our second big climb of the day (another ~1500′ in ~2 miles). Even after hanging out by a stream after that climb to snack and rest for about an hour, we got to our campsite at Cave Falls well before noon. It was good that we’d stopped by early, because the main site was already full. We found a perfect alternative, smaller but perfect for the 3 of us, and went to set up our tents. Only then did Kyle and I realize that it’d be tricky to set up our trekking pole supported tents if we still wanted our poles for the rest of the day! We were enterprising with some sticks and were both surprised at how well it worked out. 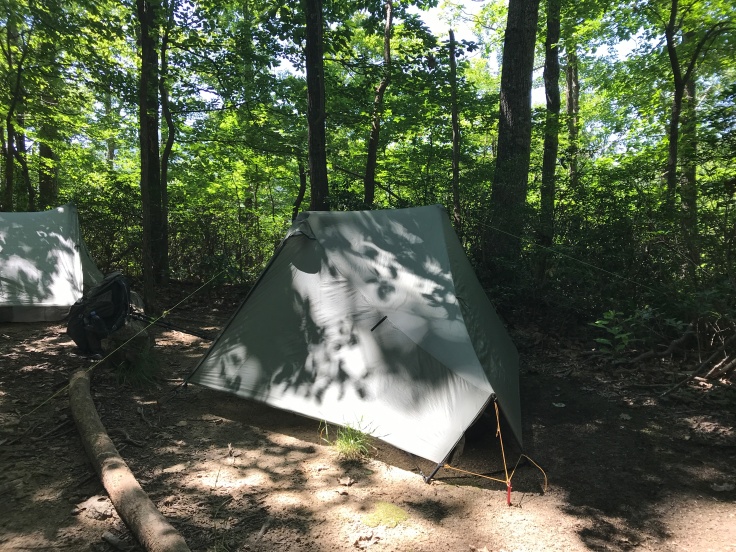 Feeling sprightly with the tent weight out of our packs (as if), we retraced our steps west on White Rocks Trail until we got to Buck Ridge Trail, which we took all the way down to the bottom. Parts of the ridge were exposed, which gave gorgeous views of the park (the first we’d seen all day) but also made it super hot in the sun. I fell behind Karan and Kyle, going slow down all the steps, and rested for a while at the base to tape up some blisters.  I assumed I’d be pretty far behind them at this point, so I turned on a podcast and got ready to climb Buck Hollow solo. Barely 2 mins into the hike, I heard Kyle call out – they were taking a break, just in a much prettier spot by a stream!

On the way up, we passed a big group of at least 20 day hikers on their way out, and then Kyle and Karan saw a bear! It spooked when they went by and ran right up a tree, clearly unsure of what to do next. This brought our wildlife count for the day to 3, along with 2 snakes.

We soldiered on past Skyline Drive and on towards Mary’s Rock, and it couldn’t have been more rewarding. Warm sun, clear skies, and a gentle breeze made it a fantastic place to dry out our clothes and have a late lunch (and chat about Balto stealing all the glory from Togo). We hung out for a while, watching parents get nervous with their kids climbing on the rocks, before finally deciding to make our way back to camp.

Camp itself was dry, so we headed straight down the side trail to Cave Falls. To our surprise, there was hardly anyone else there! Below the main waterfall is a series of pools, and we washed off and cooled our feet. After stretching and cooking dinner, we made the climb back up and were in bed by 8:30, exhausted after 24 miles and nearly 6000′ of climbs in the July heat.

Sunday morning came sooner than any of us wanted, and while we weren’t feeling too footsore, none of us were excited about another long day in the heat, so we put together a route that took us by the White Rocks Overlook, up Hazel Mountain through the stinging nettles again, down Hot-Short, and then straight back out to the car in about 8 miles.

The climb up Hazel was significantly harder than any of us had remembered, and we were surprised with how much we hadn’t noticed the first time around: extensive work building stone retaining walls, a long flat section through evergreens, and – oddly – a single brick wrapped in duct tape at the end of the trail. According to Facebook, there had apparently been a whole duffel bag full of bricks at that junction on July 4. Seems like the rangers got most of them, but there was still at least one straggler left behind.

We made it back to the car by 10:15, and while we were unsurprised to have passed people still hanging out in campsites along Nicholson, we were somewhat surprised at how many people were only just entering the park (presumably to hike Old Rag). I can’t imagine how long the lines must have been through the scrambles, and how unpleasant it’d be to sit up there in the heat and humidity. Glad to be done with our day before the heat kicked in, we drove out to Griffin Tavern where we had brunch and beer.

Thanks for joining me out there, Karan and Kyle! Suffering per person was significantly lower than if it had been just me 🙂

Check out that greenery in the Sods! 😲⁠
#TripTuesday takes us back to summer fun in #ShenandoahNationalPark in 2019.⁠
Link in profile: WFA scholarships, gear for sale, goodbye to @evankmccarthy! #dculbackpacking #ultralightbackpacking
Oh Dolly Sods, how we love thee!⁠
The views that make it all worth it.⁠
A few weeks ago on the #LoyalsockTrail.⁠