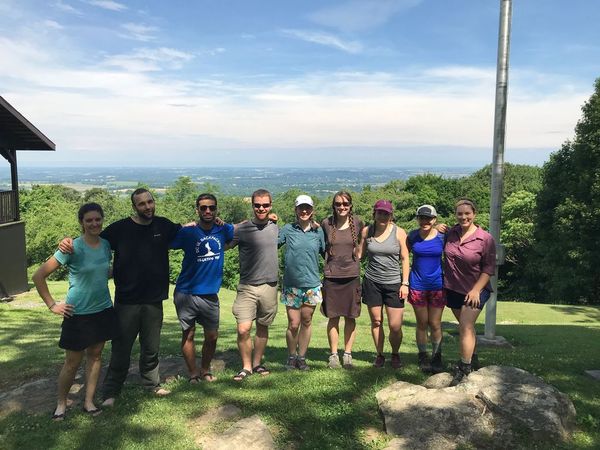 It was that time of the year again: time for some AT trail magic! Cassie set up a repeat of last year’s route since it worked out so well. We had nine people and four cars so Cassie, Kate, Maddie, Crusher, and Ashley dropped two in Pen Mar and met Karan, Trang, Bryan, and I on Route 30 near Caledonia State Park. Everyone was loaded up on trail magic. Among us, we had a lot of fruit, muffins, cookies, soda, beer, and even some vegetables!

It did not take long for us to come across our first thru-hiker, a gentleman called No Keys, who was surprised and delighted to receive some trail magic. However, he was disappointed to discover that he had lost another bit of trail magic he had found that morning. A small, beautifully hand-carved spoon had fallen out of his pocket. We pledged to keep an eye out for it and carried on.

Less than a mile later we found the spoon and handed it off to the next group of thru-hikers we came across. They were also thrilled to receive some mobile magic and said they would try to return the spoon to No Keys. We continued to come across a pretty steady stream of hikers, including the Corey family who were hiking with their three kids. We did our best not to overwhelm the thru-hikers with all of our offerings to varying degrees of success.

Around noon, we took a lunch break at the Rocky Mountain Shelter intersection. Some of us jealously eyed Kate’s ultralight chair as we took a seat on the surrounding logs.

The hiker crowd thinned out after lunch. We took leisurely breaks during the afternoon to ensure we did not get to camp too early, including a nap on Chimney Rocks. We also played a challenging game of “pickles or ice cream.” Our break strategy worked: we got to camp around 5pm and set up at the large group site across the trail from the shelter. We also admired the privy, even though the doorbell and light switch were non-functional.

At camp, Cassie led us through her stretching routine. We chatted with the thru-hikers and section hikers and tried to unload as much of our trail magic as we could. Cassie and Karan pulled out their beers, Kate set up a fresh veggie platter, and Maddie threw in some Sour Patch Kids for dessert. After dinner, some of the group found the motivation to make a fire at 8:30pm and Bryan threw on enough wood to ensure that we were up until 9:30pm- way past hiker midnight.

The next morning we were on the trail by 7:30am. Some of us were out of trail magic but Crusher and Ashley continued to dole out their watermelon and bags of berries. The trail was pretty mild but the high humidity had us drenched in sweat at every minor climb. Cassie unloaded the last of her clementines just as we walked in to Pen Mar to find Trang there chatting with a spunky senior couple. We took our group “prom” photo, reversed the shuttle and headed to the Gettysburg ABC to celebrate.

Overall, the trip was very successful. It’s always fun to spread some trail magic and hear the thru-hikers’ stories. Until next year!