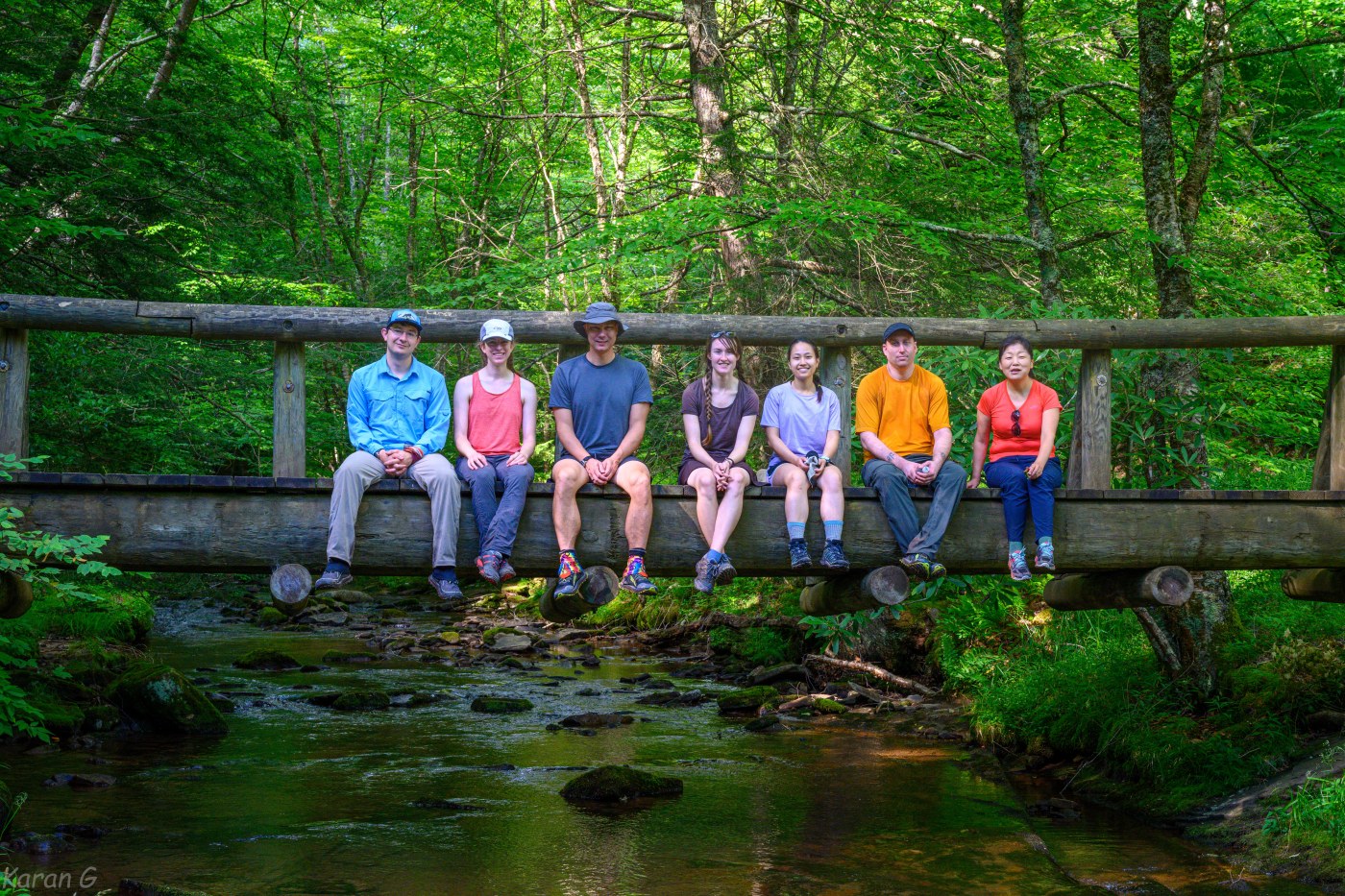 Enjoying the cool weather on the Laurel Fork Wilderness a few weeks ago, David and I discussed setting up a trip to Seneca Creek Wilderness. The idea was born, and while David couldn’t join, the trip was set.  The DC crew – Ian, Trang, Cassie, Sophie, Kylie and I – met Brian and John at the Spruce Knob parking lot. The drive to the trailhead included a 10 min passage through intense, pouring rain – like going through a dark tunnel. Was that a sign? It probably was!

At the trailhead, we greeted each other, and set foot on the trail in the afterglow of sunet, with temps in the low 60s. We were relishing not being in the DC heat. We found a campsite 0.5 miles in and setup our shelters on soft pine needles. It was a perfect start, and it was determined that the trip would be perfect regardless of how the next couple of days went.

The next morning, we continued on the Huckleberry Trail. The trail traverses on the ridgeline of Spruce Knob. The miles rolled by easily while we were lost in trail conversations and going gradually downhill. At a 4-way trail junction, we briefly stepped on the Horton Trail before taking Judy Springs trail down to Seneca Creek. The descent through the meadows treated us to open views of the valley.

The breakfast break near the bridge over Seneca Creek was nice – it was still morning time and temps hadn’t really warmed up. We took the Seneca Creek trail and walked upstream. We ran into other people also hiking/trail running in the area. At the junction with Tom Lick Run Trail, we turned right. While the trail junctions were very well marked, the trail/bridge here was damaged. Out came the GPSes, and in a few minutes, we were back on trail. We gradully rose to Allegheny Mountain Trail which was super muddy. Tire prints of a large, heavy vehicle was probably the root cause. Next, we took the North Prong trail and took a leisurely lunch break next to a stream.

We took the Elza trail, connected to Leading Ridge trail which brought us back to Allegheny Mountain trail. The hiking was mostly flat as we progressed North. We took small breaks here and there so we didn’t get to campsite too early. We carefully descended on the Horton trail as it was steep and sidehilly. There was also some stinging nettle growth along this stretch. At the bottom, we hopped across Seneca Creek (dry crossing) and started scoping out campsites. As expected, the campsites near the waterfall were taken. There wasn’t any other appropriate campsite not too far from the falls, so we settled for the first site we had come across.

As we setup camp, it felt as if rain was imminent. We heard distant thunders, but were rather optimistic and gathered a lot of firewood. Some people went for a refreshing dip near the falls. As we made fire, some of us were hesitant to start cooking dinners wondering if it was really going to rain. The rain was constantly threatening, but luckily never really materialized. Brian shared beer, Cassie shared chocolate pudding, and bundled together with the warm fire, we had a fantastic time. Some of us ventured to the falls for some photo-ops!

The storms seemed to have cleared off as we turned in around 9 PM. We had no clue what was around the corner. I woke up briefly for a bathroom break around midnight and saw amazing fireflies dancing near the campsite. I also saw inaudible distant lightning in the sky – the combination was very pretty! Around 1:30 AM, the thunder drew closer. It started raining slowly and picked up fast. The next 2 hours were somewhat of a nightmare – loud thunders struck not far from where we were and boomed loudly in the valley. The rain was torrential and only seemed to slow down for a couple of minutes. The rain hit so hard on the ground that tents started getting wet on the inside from the drops splashing on the ground. It finally ended around 4 AM. I think everyone had water inside their tents, but nobody got their bags soaked (?).

When we woke up (again) in the morning, the creek was roaring loud. The rocks we used to hop across were no longer visible and water levels were 2 feet higher! A completely dry stream next to camp was flowing with large amounts of water. There were a few people at campsites on the other side – they would either have to wait to cross or take the trails to the ridge and hike around. We never found out. I cut our hike short by ~2 miles. On the way out of camp, we saw the ridiculous amount of water at the falls and posed for a group pic. Luckily, our plans didn’t involve crossing the creek.

We took the Horton trail and started climbing steadily towards the ridge. It wasn’t raining, but it was definitely humid. It was impossible to keep our feet dry – there were numerous stream crossings and the trail was a stream in many places. We returned to the 4-way junction and retraced our steps on the Huckleberry trail. This stretch was extra muddy, but since our feet were wet anyways, it didn’t matter. The temperatures were cooler and the breeze felt really nice as we progressed. We made it back to the cars. Our splits ended up being something like 0.5/18/8 miles. Some of us did a quick out and back to Spruce Knob: the highest point in WV. There was no view, however. We were completely surrounded in fog!

On the way back, we stopped at Front Porch restaurant and learned that US-33 was closed due to flooding conditions. Some people had to be evacuated from a campground on US-33, the town of Harman was hit pretty badly too (see links below). So, it was actually bad. And what we thought was at least an inch of rain, was more like 2-7 inches!! It all makes sense. I was relieved that it didn’t affect us much – hope it didn’t affect other people much too! (Link 1, Link 2)

FWIW – Pizzas at Front Porch were good. The drive back to DC was smooth, with an ice cream stop along the way. Overall, the trip went very well. WV has been a great sanctuary to escape DC’s hot temperatures and I know few people already wanna go back fo’ mo’.

This cool video from Ian summarizes everything: https://youtu.be/LIOC_lFomyE