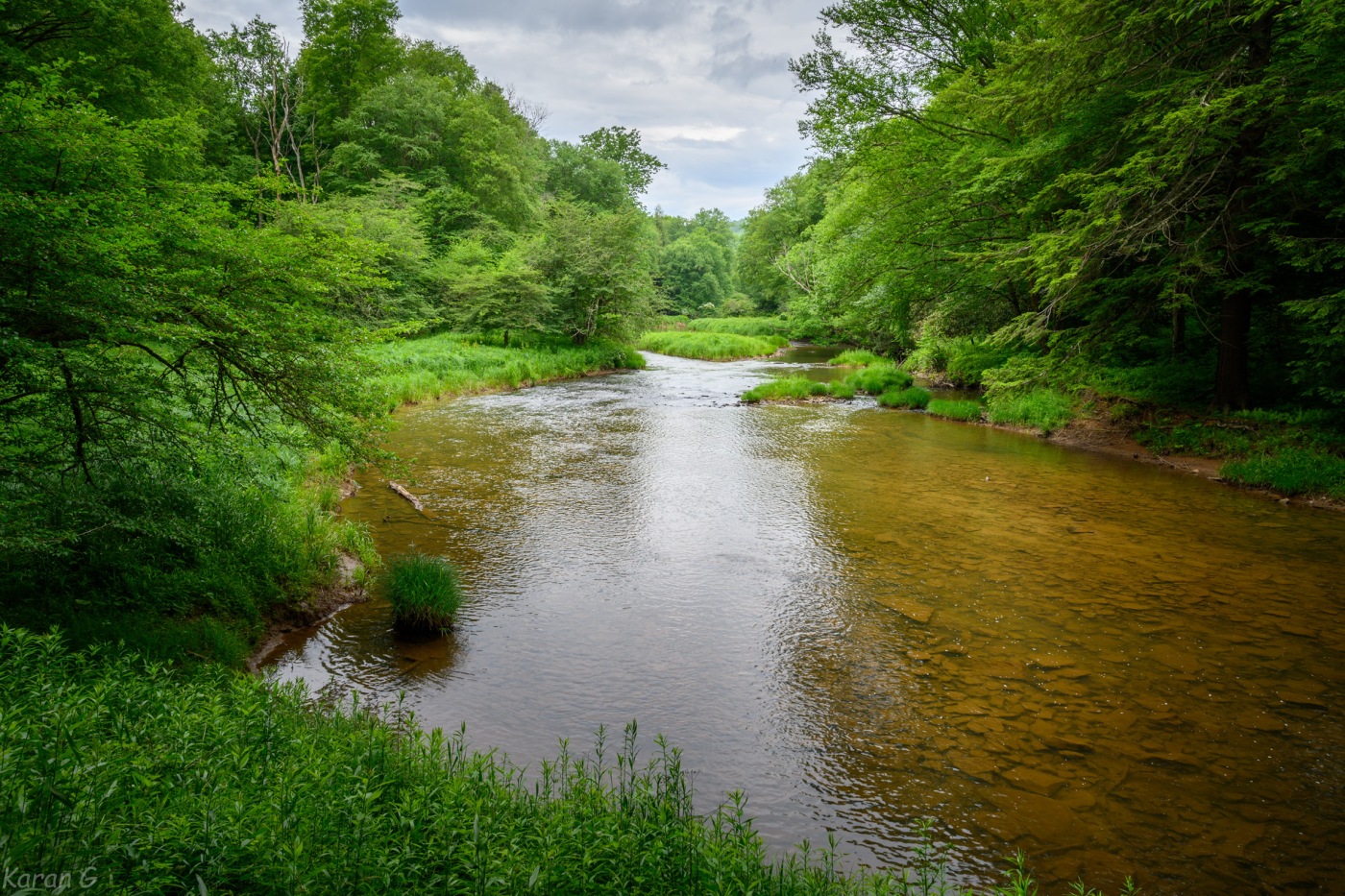 As we were looking for a good summer route, Karan spotted a trip that Ben had previously planned in the Laurel Fork Wilderness. It would be new territory for us so we decided to give it a try. David and Logan joined us from Vienna and we set out into the Friday evening traffic.

After the requisite Sheetz stop in Moorefield, we arrived at the trailhead close to 9:30pm. The fields around us were filled with fireflies and we enjoyed the light show as we walked three miles along the West Fork Rail Trail. It was easy walking although Karan almost stepped off the trail, down an embankment when we were walking with our headlamps off. Our campsite for the night was supposed to be near the turn off to the High Falls Trail and we found a place under a few pine trees that would do. It’s a fairly small site but it had room for 4 to 5 cozy tents.

Since we got into camp so late and did not have a long day on Saturday, we decided to sleep in (by DCUL standards) until 7am, although some of us were woken up earlier by an angry squirrel. Less than an hour later, the four of us departed camp and after a brief, overgrown wooded section arrived at a short road walk on FR44. We were supposed to get on a trail within half a mile but we never saw the turnoff. Rather than go back to look for it, we took an alternate old forest road that reconnected with our route near a gas well. Along the way, a young black bear ran across the trail in front of us. No sign of the mama bear but later in the day we did see some rather large bear paw prints.

After a few miles, we met up with the Laurel River Trail-South. At this time of year, it was fairly overgrown but not annoyingly so. David also had his first ever run-in with stinging nettles-what an occasion! We walked through the Laurel Fork Campground, which was the only time we saw anyone during the trip. The four of us took a break at one of the sites next to the river to eat first lunch and joked about calling it a day there. Alas, we continued on navigating through the so-called “bushwacks” which, for the most part, were really just unmarked field crossings. We did have trouble finding the trail after the last one but just eventually rejoined the trail after stumbling through the woods. The trail markers started to play peek-a-boo and disappeared completely at a gas pipeline opening. Once again, we had difficulty locating the trail on the other side of the opening but found it after pushing through some bushes.

From here, the trail became easier to follow. We forded the river which was easy with the low water level. A short time later, we passed a nice campsite on the river but decided to keep pushing for what Mid-Atlantic Hikes described as 2 or 3 “potential” campsites further on. We found a spot along an old railroad grade shortly after passing the pipeline and called it a day. David held an “open house” for his new tent and the four of us made short order of the whiskey that he and Logan brought.

The next day presented us with some challenges. Mid-Atlantic Hikes described this section as follows: “You’ll also not be bushwhacking. The trails are either obvious or well marked” but this is no longer the case. The amount of the blowdown made it feel a lot more like bushwhacking and the trail markers played peek-a-boo again. That changed once we converged with the Allegheny Trail. From there, it was a well-marked and relatively clear trail back to the road and another 2.7 miles back to the cars.

We got what we came for with trail: solitude. It was made even more pleasant by flat meandering along the river. The trail could be difficult to follow at times, either due to blowdown or lack of trail markers but it is navigable with a GPS or by looking around long enough. The four of us agreed that late fall or early spring would probably the ideal time to do this trail due to overgrowth. We may be back!

#Throwback to the Laurel Highlands Trail in May, 2019.⁠
Last weekend's Four State Challenge meant a very pre-dawn walk through the iconic town of Harper's Ferry for our intrepid challengers.⁠
It's October already. You know what that means? We can look forward to our winter treks to the Adirondacks. ⁠
What is this we have found? What, indeed!⁠
Twenty miles the hard way...⁠
Karan G captured the scenery in our recent trip to the Black Forest Trail in Pennsylvania.⁠