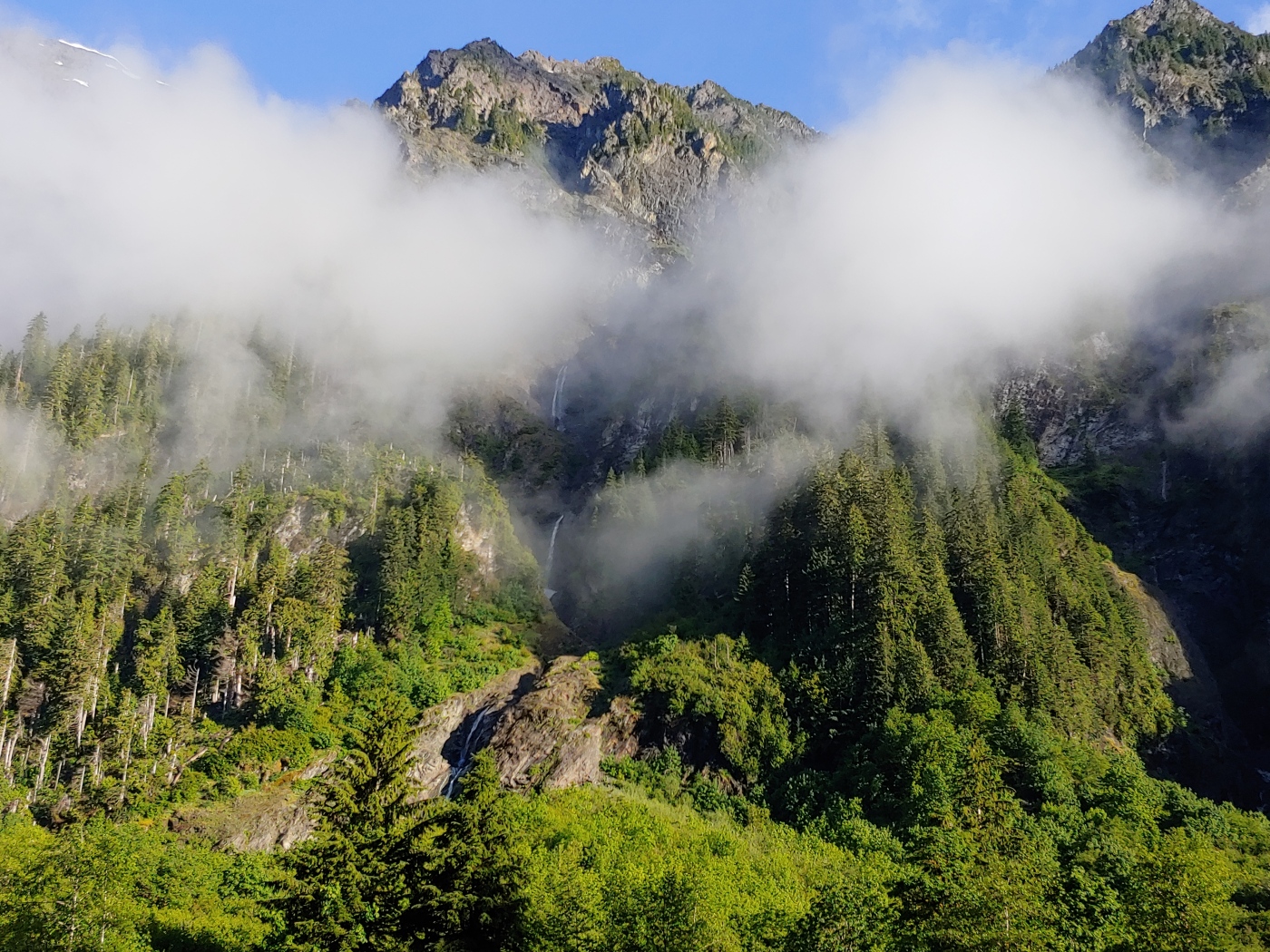 I was scheduled to go to Seattle for a work trip, so I reached out to Max (Yet) and Doug Ide, the local DCUL-ers, for route suggestions. They both ended up being free those days, so we soon put together a route for the 3 of us. Despite having both lived in Seattle for years, Max and Doug had never hiked together out here. We were all looking forward to the odd reunion, and ended up having a lovely time on trail, despite (or because of?) having to make some on-the-fly changes to the route.

Max picked me up at the Bremerton ferry after my work wrapped up on Wednesday, and we hit the road around 4pm. It took about 4 hrs to get to the trailhead, between traffic and a very slowly serviced stop at Subway, where to our surprise we ran into Doug in the parking lot. The plan had been to meet him at camp, 3-4 miles in, so we were a bit confused. Turns out he’d gotten in around 3:30 and had hiked out to Success Stream, and while there was a campsite there it was only big enough for a single small tent. Even Max’s duplex would’ve had trouble squeezing in. Doug forded the (thigh deep) river in search for better sites on the other side, but to no avail – it got steep right away. So back across the river he went, and back out to the trailhead to wait for us. Much kinder than setting up his tent and telling us we were SOL when we night hiked in later on.

We decided to just settle in at the trailhead campground for the night, rather than reversing the loop, and Max got to set up his duplex for the first time with plenty of daylight to spare. We hung out and chatted for a bit, and went to bed shortly before 10pm. It was after sunset, but still dusky at that hour – the days are long up here this time of year.

Thursday, we woke up to clear skies and a cold morning, and got on trail around 7am. It started off well and easily! This section of trail had about half a dozen blowdowns that required scrambling over or under, and half as many avalanche chutes to cross. Nothing too sketchy, but it did slow us down a bit. A handful of wooden bridges through here, although some planks seemed on their last legs. 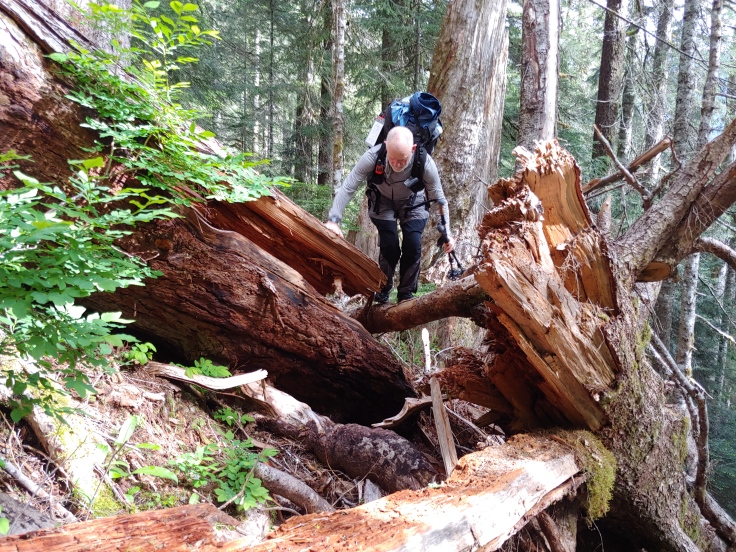 We got to Success in just a couple hours, agreeing with Doug that there wasn’t much of a campsite there at all. Fine for 1 person, but definitely not for 3.  The stream crossing wasn’t so bad at all; we found a way across that only came just above our knees for a bit. It was very cold but not moving too fast.

After that, it was a steep uphill climb to the turnoff, and then an even steeper climb to Sundown. Coming from the East Coast, I was amazed with how big the trees all were; it’s virgin forest for the most part, well watered with all the clouds caught on the mountains. It was beautiful when we got up to Sundown Lake, although it had started to precipitate by this point (a classic “wintry mix”). When we approached the lake to check it out, a bald eagle flew out of the ground cover and over our heads, not 20 feet away from us. Shortly after we saw the print of what seemed like some sort of large cat, but we never saw the owner (fortunately). 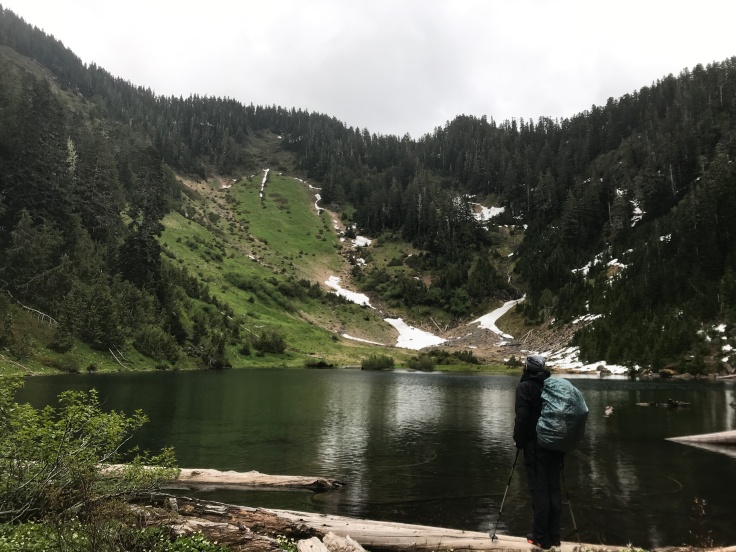 We started seeing snow on the ground shortly after leaving Sundown. It was about 2 miles to McGravey and another 2 on unmarked trail to Belview, but the going got extremely slow as we encountered more snow. We had microspikes, but were in trail runners and had decided not to bring ice axes. This section was extremely sketchy. The snow was pretty hard packed, so we had to kick in each step. By this point it was properly snowing, too. We skipped snow sections where we could, scrambling straight up hills to avoid doubling across the switchbacks.

About a mile in, we encountered a crossing that was just too far out of our comfort zones – the slide down was too dangerous for us to feel comfortable taking the risk without ice axes. And even with axes, it still would’ve been just as slow and hard. We were almost over the ridge line and were hopeful that the snow wouldn’t be as bad on the other side, but we had no way of knowing and felt uneasy with how much more of Six Ridge remained and how much harder any further forward progress would make the potential return journey. Since we couldn’t find an easy (and safe) way to pop over the ridge quick to check it out, we decided just to turn back. It was around 1pm at this point.

It took about an hour, but we all made it safely back off the ridge and out of the snow. From there it was much easier going. We stopped to eat a late lunch just past Sundown Lake, taking only a short break because it really hadn’t stopped snowing/raining/sleeting. We made it back across the two river fords (Success was definitely faster and deeper at this time of day, but still nothing too tricky), through all the blow downs, and across the avalanche chutes. It was after 7pm by the time we reached the trailhead (a full 12 hours to go about 18 miles with just shy of 5000′ of gain), and while we’d discussed pushing on to Pony Bridge and starting the clockwise journey around the loop, we were all pretty hungry. So, back to the cars, and back to the campground. We treated ourselves to turns in Doug’s heated seats, and crawled into our tents around 930pm. It rained the entire evening, with no indication of lightening up overnight, and stayed around 50 degrees – just right for the cold to seep into your bones.

It didn’t stop raining all night long. Doug was dry and cozy in his car (for the past 2 nights!) but mine and Max’s tents were just soaked by the morning. We got back on trail heading clockwise around 7:15am. It was easy going to Pony Bridge, where we encountered lots of really great campsites options. We were all pretty beat last night, so it made sense not to keep pushing, but good to know we would have had the option. Just north of that section, we saw two huge herds of elk – maybe 20-30 in each herd, right by the trail. We stopped and watched them graze for a while.

We passed lots of hikers leaving the Valley, but hardly anyone heading our way. They all said that you couldn’t see anything from Anderson, and that the stream crossing leading up to it was either impassable or no big deal, depending on who you asked. It was a fairly quiet, uneventful hike in, although my hip started giving me some issues (leftover injury from the Memorial Day trip). Most of the blow downs that Max had encountered a month ago were all cleared out; the trail was very well maintained and very moderate. We enjoyed looking out for trees growing out of other tree stumps and puzzling out the order of it all, and imagining how strong the storms must have been to topple some of the larger downed trees.

We got to Enchanted Valley around 1:45, and the meadow was almost entirely empty – just 2 other tents that we could see. It was gorgeous, of course, but a low hanging fog obscured most of the waterfalls and a chilly rain had shown up that made us want to keep moving. Doug mentioned a great campsite just a quarter mile further, so we pressed on. About a mile later, we arrived – it was indeed a great group site. Tucked under tall trees that protected it from the wind and rain, easy access to the stream for water, and – best of all – a fire ring with plenty of dry wood in the area.

Even though it was just past 2, we decided to settle in for the night. We were tired from the day before, excited about the prospect of a lazy afternoon in camp with a fire, and felt confident that we could make it back to the cars in good time the next day. And so we passed the time: setting up shelters, collecting fire wood, changing into dry clothes, snacking, chatting with a ranger who passed through (she knew we were attempting Six Ridge and was glad to hear we’d made it out safely), and drinking whiskey. It continued to mist off and on, but next to the warm fire and under the trees we barely noticed it.

Just in time for our last day on trail, we woke up on Saturday to clear blue skies! The remaining fog was lifting out of the valley, and we could see the top of the ridge for the first time since arriving. We took the opportunity to walk a bit further north, catching a gorgeous view of Anderson Pass with the glacier peeking through on the left.

We returned to camp, grabbed our packs, and headed south to retrace our steps from yesterday. We were all in good spirits from the long rest yesterday and the first warm sun in days, and made great time on the gentle descent out of the valley. Dozens of people were headed in opposite us; we were jealous of the weather they’d get to enjoy, but not of the loads they were carrying in. We took some leisurely breaks along the way, and we got a nice couple to take our photo at Pony Bridge. She had a fancy camera on her so I figured we’d get a good shot, but we had a finger covering the lens the first try. Fortunately she took direction the second time!

It was just after 1pm when we made it back to the cars. On our way out, we stopped to see the world’s largest spruce tree. It felt out of place, just next to the campground rather than deep in the forest surrounded with other huge trees. After stopping at the ranger station to pick up a yearly pass for Max, we headed out to Lighthouse Drive-In in Aberdeen for post-hike burgers in classic DCUL fashion. 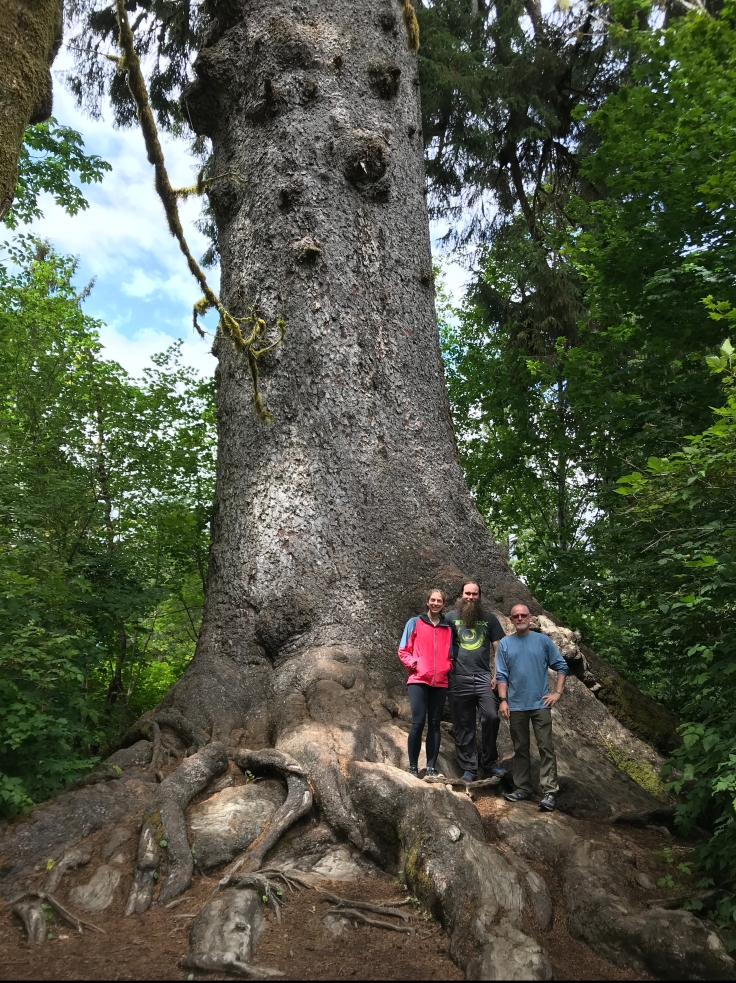 Despite some early setbacks with the snow, it was a great couple of days on trail and we came close to our total anticipated mileage for the trip (although with significantly less climbing involved!). We were all glad we turned back when we had, rather than pushing on and risking getting stuck between Six Ridge and LaCrosse Pass, which I can’t imagine was any easier to get through. While sturdier winter gear would have made it more approachable, it also would have let us go further than maybe we should have – so, no regrets about how it all played out.

It was great hiking with Yeti and Quarter-Mile; it sounds like they’ll hike together more often this summer, and I hope I’ll be able to join them again sometime!