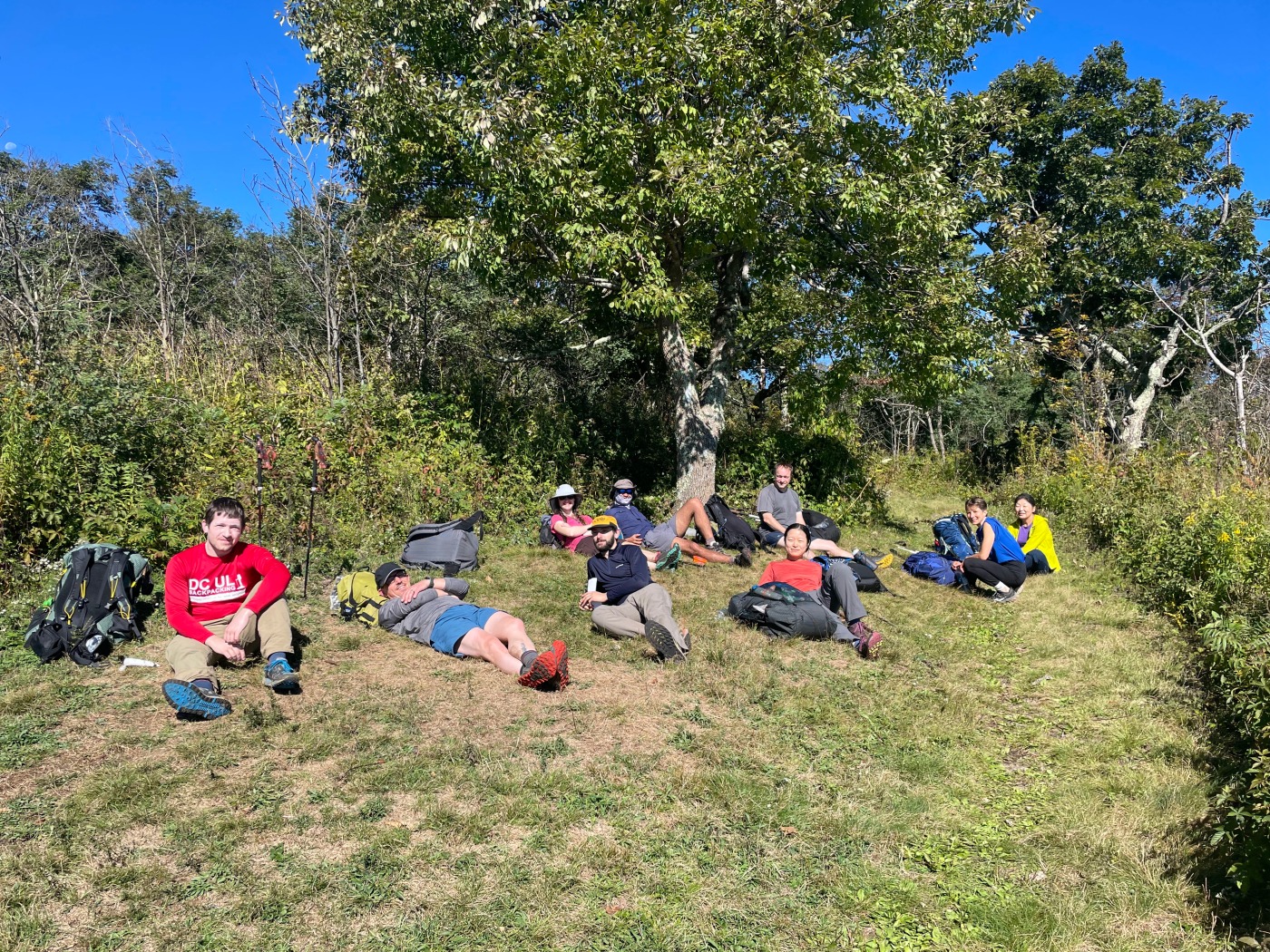 Due to last minute logistic changes on our sister trip, Twenty the Harder Way, we ended up combining the two trips. Sophie and Chandler got a head start on the drive while the rest of us (Logan, Stanley, Yvette, Chris, Alexander, Dan, Karan, and I) met at Vienna on Friday evening. On the drive down, Alexander convinced us to abandon our normal Sheetz dinner for burritos in Harrisonburg and we weren’t mad about the outcome.

At Reid’s Gap, most of the group piled out of the cars to start hiking while Logan, Stanley, and Karan bravely carried on to set up the shuttle. With a chill in the air, it truly felt like a fall evening but we warmed up on the climb. About a mile and a half later, we stumbled across Chandler and Sophie camped near Maupin Shelter. The drivers arrived a few hours later.

Far too soon for most of us, it was 6:30am. Time to get up! We packed up in a timely manner and continued the climb up Three Ridges. We took in the view at what we later learned is called “Hanging Rock” and tried to trace the trail up the Priest. After a little more uphill, we crested the top of Three Ridges and started the long descent to the Tye River.

Alexander was waiting for us at the unusually swift-running Tye River. He had already taken a dip and proceeded to cajole the rest of us into following suit but only Karan and Dan took him up on it. The rest of us enjoyed our snacks on the shore.

After the break, it was time to tackle the Priest! The gradual, windy start of this climb belies the fact that it seems to go on forever. Along the way, we passed a trail runner doing loops of Three Ridges and the Priest. He was aiming to climb 29,000ft in 24 hours. Hardcore. We were happy to make it to the top of the Priest once! We took another break there to catch our breath and let the wind dry us off. Chandler pulled out several chocolate bars to share. A fitting treat!

After the Priest, several of us stopped off at the shelter to fill up on water for the last six miles of the day. A short time later, I came across Karan with the contents of his pack strewn on the side of the trail. Unfortunately, one of the beers he was secretly carrying had leaked in his pack! We were able to isolate the offending beer and carry on although Karan’s pack did then have the smell of a college dorm basement on Sunday morning.

We carried on to Spy Rock where we took another break to enjoy the view. There were a few people there when we arrived but after they left, we had it all to ourselves. I was honestly surprised not to see more people on such a beautiful fall day but I wasn’t complaining.

After we left Spy Rock, we had only a few more miles to Porters Gap. We set up there and quickly had a fire going. Karan pulled out his beer and Chandler offered up even more chocolate, earning himself the trail name “Willy Wonka.”

Everyone retired by hiker midnight. Chandler had some trouble adjusting to his new hammock and ended up on the ground. Luckily, he was able to escape on his own. We later learned there may have been some wildlife activity nearby in the night. Alexander’s Ursack had some claw marks on it.

In the morning, we were up with the sun and on the trail by 7:30am. It felt chilly at first but we warmed up on the mild climb up towards Seeley-Woodworth Shelter. Overall, the streams were running much higher than I’ve seen in this area. As we walked along, there was some debate over poles: straps or no straps? We stopped at Wolf Rock briefly for the view.

The next several miles passed by pretty quickly. After the climb up to Tar Jacket Ridge, we took a final break to soak up the sun and views. We had a few spider flinging incidents but no one came to harm. Less than a mile later, we made it back to the cars!

All in all, we had a great group and fantastic weather!