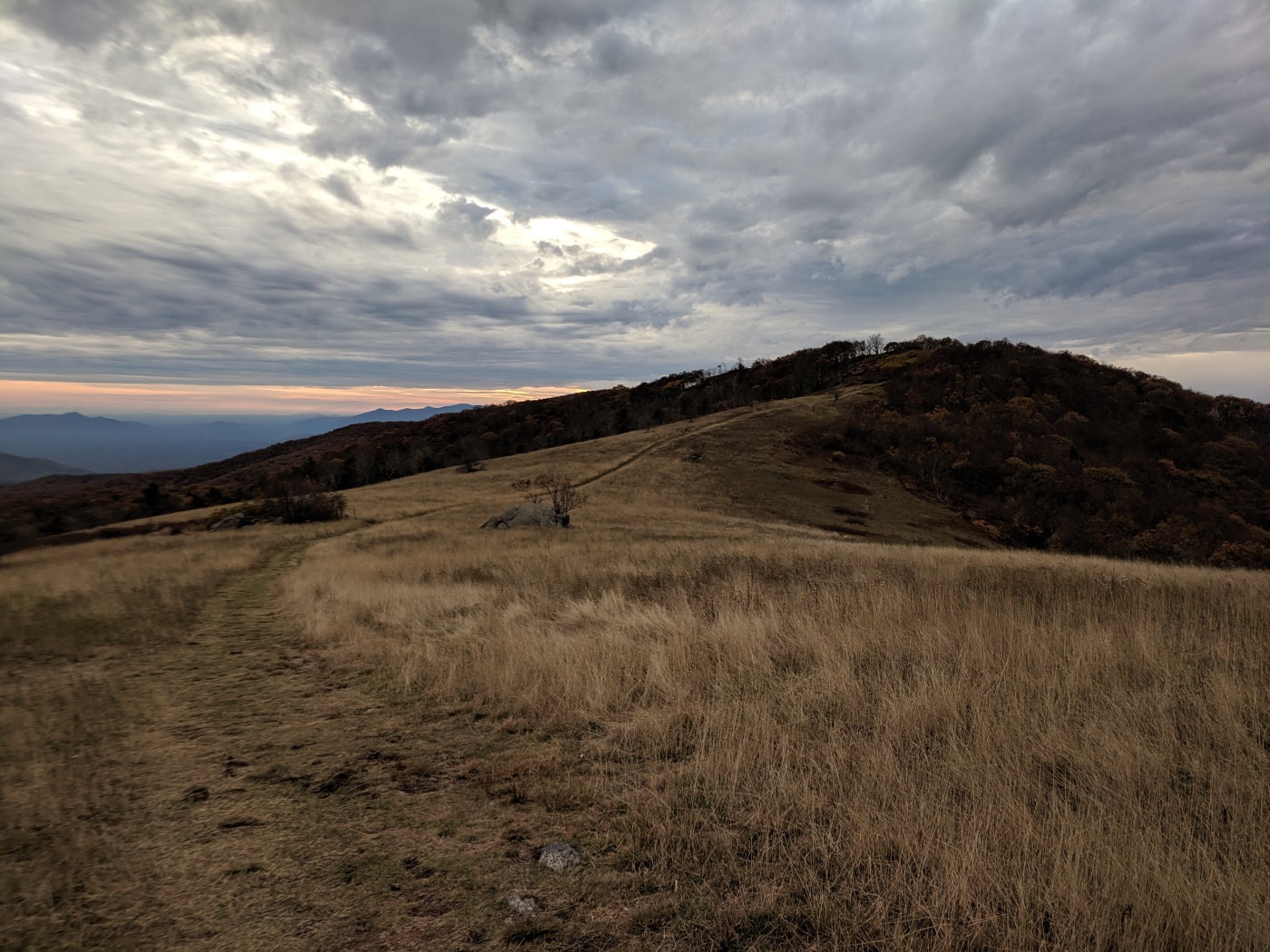 We had a slightly different agenda for this DCUL outing.  We’d use all our UL weight savings to carry massive amounts of camera gear, and our miles-crushing legs to give us ample time to hunt for fall compositions.

After grouping up at Vienna Metro, we (Shuttle, GQ, Corpse Foot, Camel, Theo, Loay, Michelle, Hayden, and myself) made our way (after a requisite Sheetz stop, of course) to the lower Crabtree falls parking area.  We rallied with Jim, parked three cars for the shuttle, then piled in my FJ and Jen’s Forester for the drive to Hog Camp Gap.

A winding, bumpy, 45 minute drive later (complete with a couple of u-turns, damn you Google Maps) we made it to the parking area on the AT below Mt. Pleasant and Cole Mountain.  We made a brutal 100 ft. walk all the way to the open field to setup camp. We talked shop for a while then hit the trail to Cole mountain, hoping for good light for sunset.

The scenery and fall foliage were fantastic, and the light not bad despite the low hanging cloud cover.  Peter set up for a time-lapse, while the rest of us spread out hunting for comps.  Michelle produced a drone (and no small amount of envy) and was soon scouting from on high.  Plenty of hikers and tourists passed through or lingered around the open balds. A few of us managed to score some cool shots.

After waiting in vain for that last minute pop of sunset, we descended back to camp by head lamp.  While the others hunted for some water, Jimmy and I chopped wood and got a fire going. More shop talk took us well passed backpacker midnight.  Several of us contracted a fatal dose of GAS (Gear Acquisition Syndrome). If you don’t want to spend money, don’t get into photography/videography.

The next day, a few of us stirred pre-dawn to take another shot at Cole Mountain.  Shortly after I arrived, streams of hikers started to show up and I nearly ran into a tent up on the bald.  We had a few minutes of awesome light this time! A quick breakfast was had, then we all went back down the mountain to break camp and head north with the rest of the troupe.

There are some great vistas just a short climb out of Hog Camp Gap along Tar Jacket Ridge, and we took some snapshots as we made our way north.  We stopped for lunch at Seeley/Woodworth Shelter and to tank up on water. While there, Camel made the horrifying discovery of a tick in the one place a man never wants to find a tick.  With that paranoia firmly established (and the threat of a new trail-name in the offing), we 10 continued north on the AT.

Not far beyond the Shelter, we hit Porter’s Ridge.  While considering camping there, Peter and Loay dropped packs and made a scouting run north to see if any spots were open closer to Spy Rock.  We eventually decided to commit to whatever spots they found or just continue north passed Spy Rock. Jen and I opted for a World’s Strongest Man competition, carrying our scout’s packs a short way up the trial.  Thankfully they were on their way back in short order!

We finished out our 9ish mile walk, making camp along Spy Rock Road.  Then it was up to the summit to see about some more photos. There were a few people about, but it wasn’t too bad for a Saturday.  The light was abysmal, but we made the most of it. Some of us made dinner while we hoped for the sun to break through the cloud cover.  It was not to be, so we got what we could then descended as darkness fell.

We made extensive upgrades to the pitiful fire ring at camp so that it could withstand the growing wind, and soon another roaring fire was had.  We spent a few hours swapping war stories as is tradition, then it was off to bed.

Things got a bit exciting that night, as the storm front arrived early – hammering us with rain and wind.  Droplets were getting flung up on me as I lay in my hammock. I eventually (begrudgingly) got out and lowered my tarp as far as I could.  This helped, but the sideways rain still managed to break through my defenses. I rigged an inner shelter to keep my face dry in hopes of getting some sleep, but the roaring wind made the difficult.  The rest of the group fared little better, with various levels of shelter malfunctions – or just too much damned noise.

Our wake up time luckily coincided with a lull in the storm.  We broke camp and made the climb up to Spy Rock once more, then continued north on the AT.  Shortly after the second storm front hit us, with violent wind and rain. The AT was a rushing stream and everyone got a good soaking.  Luckily, the air was relatively warm.

We made it to the jeep trail just before The Priest Wilderness, and turned left.  The rain stopped and soon blue skies appeared – at just the worst time! Once again the light wasn’t cooperating as we descended to Crabtree falls.  But we got some shots anyway, and splashed our way through standing puddles and mud all the way back to our cars.

The shuttle was reversed, and we were off to Don Tequilas for some lunch in no time.

Thanks everyone for joining us on this slightly different DCUL trip!  It was fun to blend passions, and I hope you all had the opportunity to hone your photography skills.

Leave a Reply to Will Fink Cancel reply