After having multiple plans drowned out by mother nature, it was clear the only way we would get a packraft trip in as scheduled would be to flee north of the Mason-Dixon line. So we devised a plan B to tour the “Grand Canyon” of PA at the last possible minute, and converged on the Southern Terminus of the West Rim Trail at Rattlesnake Rock (map). Sadly this meant Dave “Ezbake” and Severin couldn’t make it due to insane travel times for such a short trip.

Steve “Crusher” led the crew from DC: Kyle, Bryan, Ashley, John, and Jeremy. Darren, Katie, and Tim joined me for the 4 hour car ride from Baltimore. We were rallied up and on the trail around 12:30pm with a loose plan of hiking 9ish miles to one of several camps up on the rim near Pine Creek Trail.

The hike started with a long climb. We were soon sopping wet as we dragged the extra weight of packraft, PFD, and paddles uphill through the muggy air. But after a mile and a half or so the trail leveled off as we attained the rim. Then it was an easy rolling stroll north with plenty of time to enjoy the highlight of the West Rim trail: numerous overlooks of Pine Creek. Some were socked in with greenery but plenty were open. 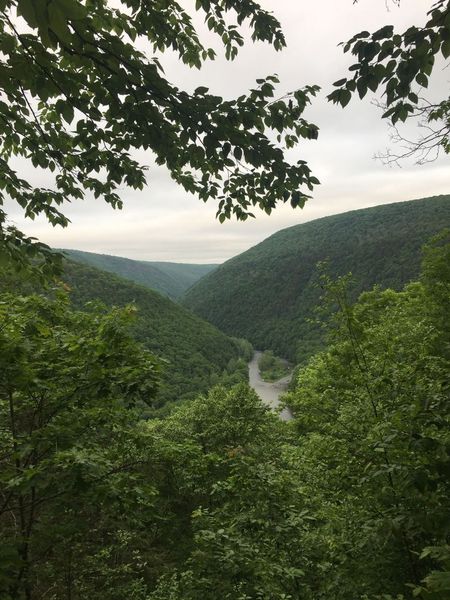 We made quick work of the walk. Unlike the horror stories you hear about hiking much of PA, the West Rim is nearly devoid of rocky sections. Much of the walking is on soft pine needles so you can just enjoy the stroll.

Water was plentiful thanks to all the recent rain. As I cruised along, I suddenly felt burning all over my body and thought I must have passed through a swarm of mosquitos – then looked down and realized the trail was crowded in with stinging nettles! I started to pay more attention to my footwork.

Before long we reached our intended camp. It was still early, so we decided to press on to get a few more miles and a longer raft the next day. This meant passing by the herd path we intended to use to access Pine Creek in the morning. But it was unappealing; infested with more nettles anyway. I blew by them without regret.

We passed a number of other sites then stopped at the one closest to Good Spring; our only opportunity for easy water at camp. It also had a nice overlook with a long view down Pine Creek. The trees blocked more of it then I remembered, but it was a nice preview of the next day’s float. 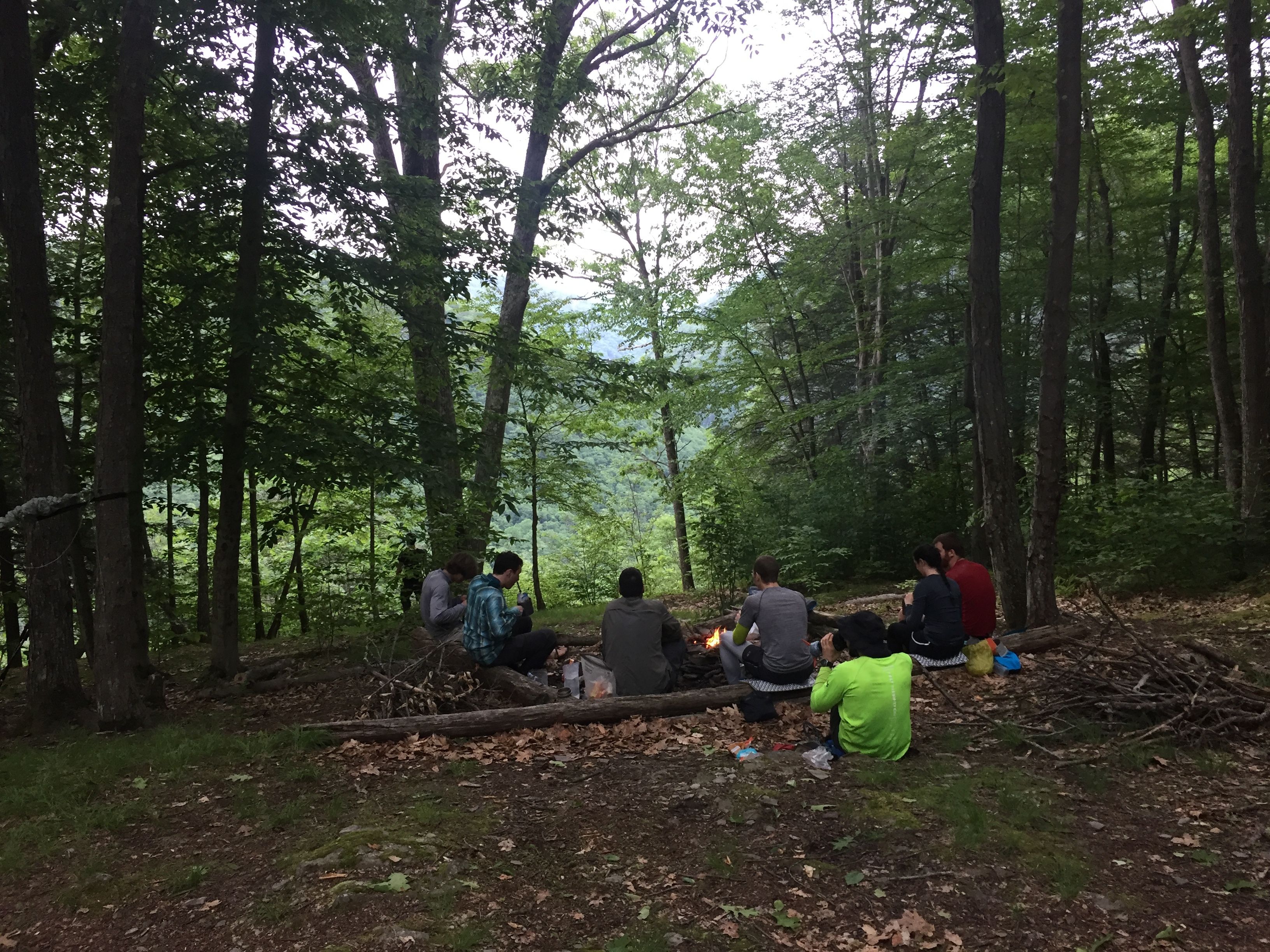 Bundles of wood were scrounged, and we whipped up a fire after a couple of abortive attempts which I blame on the general dampness! But soon enough it was roaring along, and with the shelters all set it was time for dinner and campfire stories. The merits of various stove systems were debated along with the effectiveness of different sleep systems. Backpacking cuisine ideas were bandied about as I dined on my Ramen.

Soon I felt myself dozing off as I stared into the fire – it was time for bed! Most everyone slipped away from the fire all at once. I passed out moments after curling into my hammock. I slept like the dead.

The next morning was mildly cooler. We had a quick breakfast before breaking camp then heading north to descend to the spring. Perusing the map the previous night it seemed descending Good Spring Hollow would be our easiest access to Pine Creek. But I was slightly apprehensive having bushwacked similar waterways in the past. The extra weight of our boat gear wouldn’t make it easy.

Most of the descent wasn’t bad, but we did have a few challenges: small waterfalls that had to be downclimbed. I was grateful everyone negotiated the slimy rocks without injury! I slipped several times myself and was saved by my trekking poles. 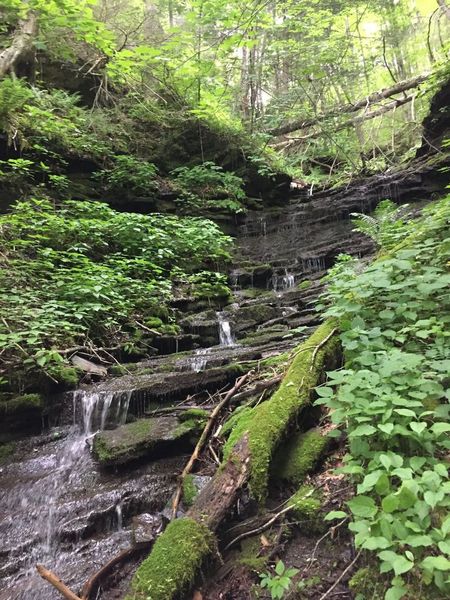 Less than a half mile of descending brought us (luckily) to a open drainage where we could inflate our packrafts. Darren had his boat ready to go before I even got there! I inflated my own boat and ate a snack while everyone assembled.

It turned out Katie’s rental boat was missing it’s plug – not good! She and Tim graciously offered to walk out, but I wasn’t having it. I attacked the inflation port with Gorilla and Tyvek tape, and it was soon fully sea-worthy. 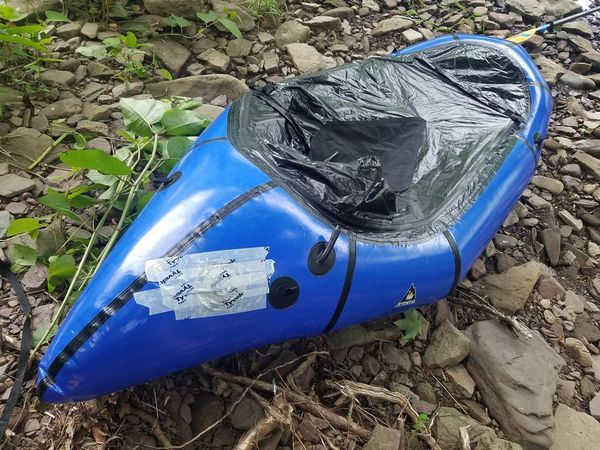 After a brief safety meeting, we hit the swiftly moving water and had to immediately paddle around a trap made by a falling tree. The water level was just below ideal paddling depth, but above average for this time of year. Luckily packrafts don’t need much water to float in, and can scrape over the shallow spots (of which there were a few). We had some fun rapids, but nothing above Class I. It was just about the perfect intro to packrafting, though it would have been nice to have a couple of more challenging obstacles thrown in.

The previous days hot walking got paid off today – we had cool temps and easy paddling. The rapid flow allowed us to cover ground incredibly quickly. With the exception of a few drizzly bits, we avoided the rain entirely. And the cloud cover gave us a break from the sun’s anvil. 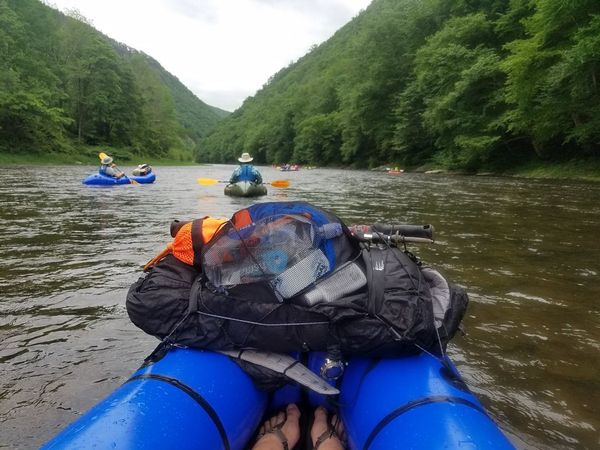 We passed many deer drinking from the creek, while ducks and geese came in for landings around us. It was a thoroughly enjoyable cruise, and we covered the distance back to Rattlesnake Rock in a fraction of the time it took to hike. It was all over far too soon, as we beached our fleet just 24 hours after setting off into the woods. But it was a long drive home, and we were hungry! So it was off to the Bullfrog in Williamsport for a classic DCUL post-meal.

Thanks everyone for pivoting flawlessly to the last minute plan B!