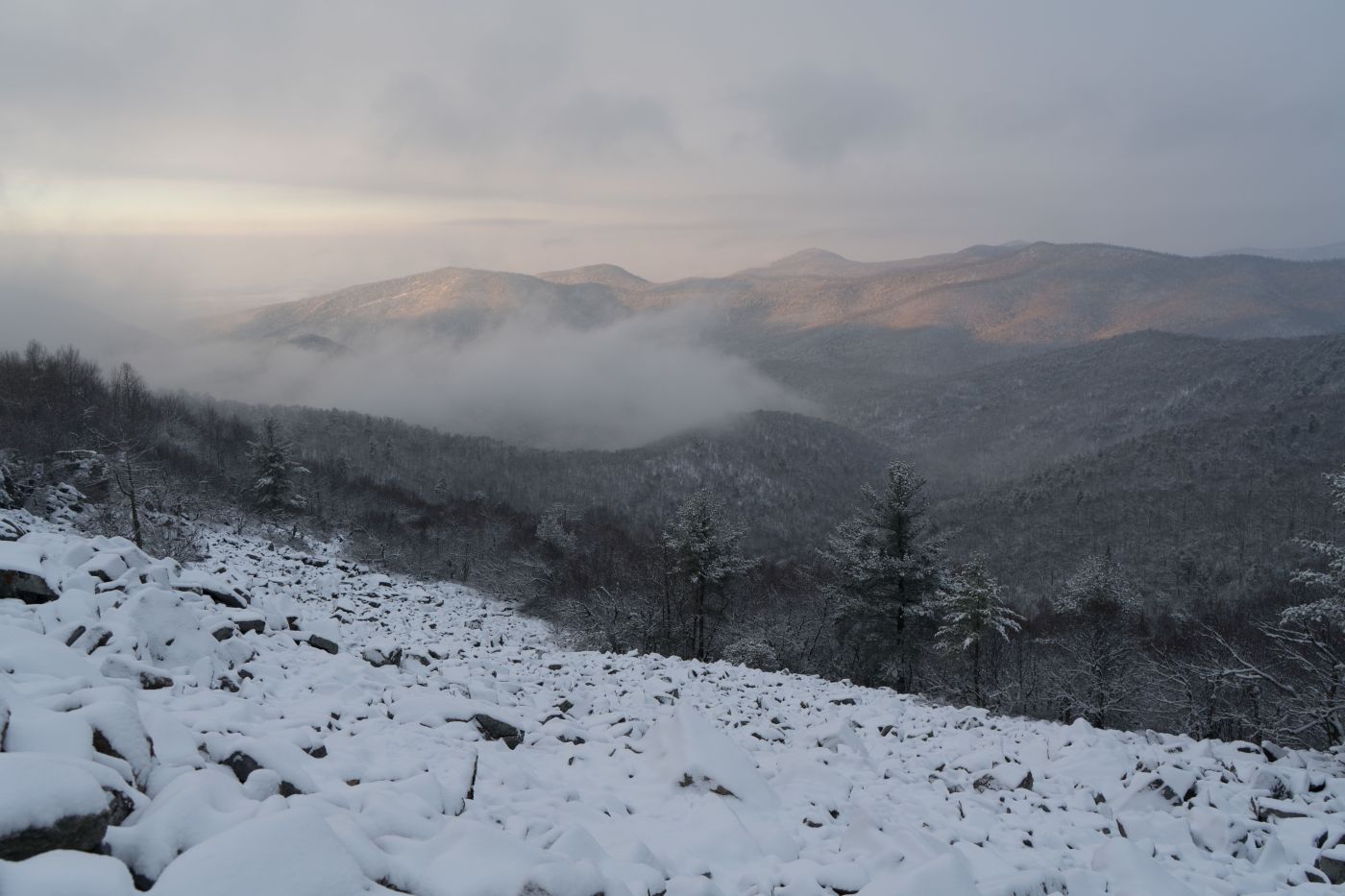 While I thought that the Catskill’s trip would have been a great trip, I couldn’t stomach the ratio of driving to hiking, so opted for a closer trip which would also double for vetting Kyle for Utah.

Steve has explained to me on a number of occasions that he doesn’t plan trips leaving from Skyline drive during the winter due to frequent closures. Since I was planning only a few days head, the weather only showed a 20% chance, so I thought it was going to be open. Even the hours before the start of the outting, it still showed as open. However, Kyle informed me that SNP had noted that they were closing Skyline drive within 3 hours on Twitter. Calling their info line indicated it was still open, but I guess it’s a sign of the times that Twitter is now a major information source. Or maybe that’s just where the current administration announces random things…

In any case, Shaf had already driven to the trailhead at Blackrock Hut in south SNP, so we were committed to having at least one car along Skyline drive. Steve noted that there’s parking on the side of the road before passing through the gates at Swift Run Gap, so that’s where Kyle and I put in.

After camping near Hightop Hut, Kyle and I headed southbound in the snow to meet up with Shaf and camp at Blackrock Hut for Saturday night. When we saw Shaf, he elected to hike to the next overlook so as to have a clearer segment for the AT section hike he’s been slowly working on. Shaf was the only person Kyle and I saw all day. While we saw some car tracks for the ranger station at Simmons Gap and heard a pack of dogs for a while, we didn’t see any other people on the trail. We didn’t even hear any cars on Skyline drive, so it was a quiet peaceful journey down the AT in SNP, which is a bit unusual, as that’s one of the more popular trails in the area.

Interestingly, Steve was out with his club over some of the same trail and ran into three heavily armed park rangers looking for poachers. Then he later ran into the poachers… so I’ll take the solitude over the interesting story.

We saw some deer in the woods and saw footprints of other large animals, but didn’t see the animals themselves. We saw footprints from bobcat, deer, bear and something that we didn’t identify.

Many of the views were socked in due to snow, but the view from Blackrock Mountain was good. Weather-wise, the 1-3″ of snow was definitely on the 3″+ side. We had overnight lows in the 20s, but didn’t have the predicted 20 MPH winds.

Sunday morning, heading out seemed to make more sense than doing an out and back from Blackrock hut, so we headed straight out. Shaf correctly predicted that the rangers on the phone would give him a hard time for a minute or two for being locked in before relenting. The park rangers are currently using a combo lock for the gate on skyline drive, so can give you the combo over the phone provided you have cell reception, which potentially saves a lot of time over having someone come out.

Equipment wise, I got to use my white gas stove, 0F sleeping bag, booties and puffy pants again, so could demo some of the useful cold weather gear to the folks who haven’t done as much cold weather camping. Everyone did stay warm on the trip and Kyle and Shaf had lighter packs than me, but I prefer a larger margin in cold weather. And Shaf has now decided to get booties too. While I took my new interchangeable lens camera, my smaller camera that fits on the front pocket might have been a better choice as I would be able to pop it out and store it in a ziplock bag without dropping the pack.

Kyle and I ended up with splits of about 3/21/1. Given the snow and 20F’s, I felt that it was a reasonable test of skill for promoting Kyle and Shaf to Veteran Members.