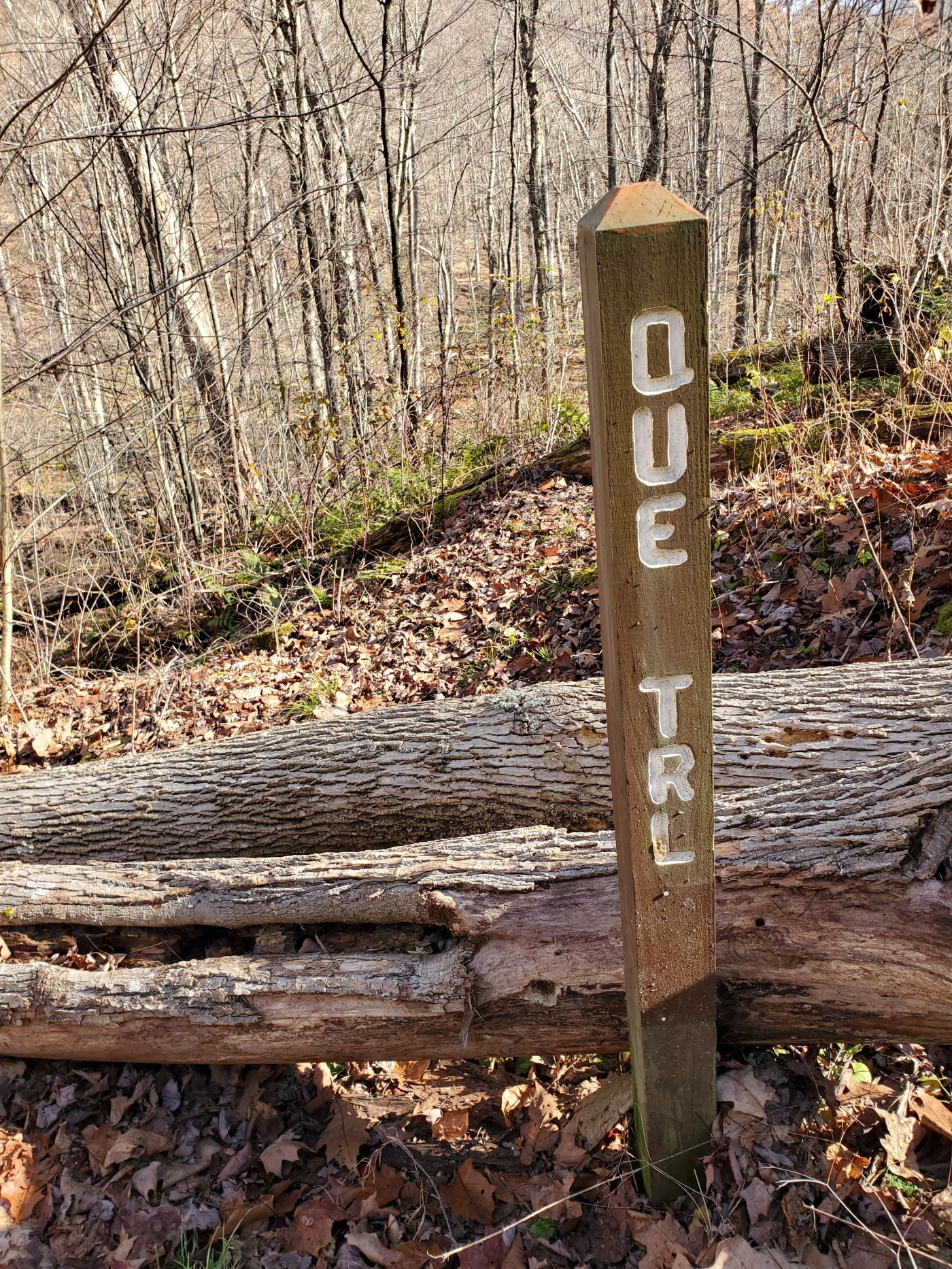 I was eagerly looking forward to hiking the Quehanna trail. I had heard great things about the trail and the experience from past trips. The recent election stress also added to the reasons to look forward to the trip. I talked to Kyle who was on the trail a month ago. His notes came in very handy for planning and I decided to follow the CCW route from the Columbus Day weekend trip. We were able to split the miles evenly and had a very satisfying experience, especially with the weather co-operating well and multiple doses of trail magic.

We started hiking Friday night from the Parker Dam state park trailhead. A note to future hikers: to be on the safe side, register your vehicle at the park office here (Rangers check for registered vehicles in the summer), and you can do so after the office is closed. To kick off the Halloween theme for the weekend, as Brian was filling the form outside the office thinking the office is closed, the door opened suddenly. No ghosts – just a ranger working late! We hiked the easy miles under the stars to our destination – some flat spots next to Little Laurel run. As I was warned, folks expecting a ‘campsite’ should keep their expectations low. We greeted Michael, who had set up right off the trail, with bright headlamps. He had arrived first and had we known what everyone else asked him, we would have also asked, “What time are we getting on the trail?”

We woke to near freezing temps in the morning, with heavy condensation on our shelters and bags. As would be the trend for the upcoming days, the sun warmed up the temps fast. Zak caught up with us in the morning. We ran into a hiker who had a coyote close to his shelter the prior night. Overall, we would go on to see less than 5 total hikers on the trail and no thru-hikers. – something that surprised me given the beautiful weather over the weekend. Our first full day had the least elevation gain, so we made pretty good time hiking the miles. We found that the creeks were running for the most part, despite a dry summer. Kylie, John, Zak, and I somehow convinced ourselves to follow a ‘view’ sign off of Gifford Run, but turned around when it looked like we were just walking on a dense ridge surrounded by trees. The last stretch of the day took us to the ridge that parallels Mosquito Creek. We scored nice views in this stretch, but the trail also sidehills here for a couple of miles. The final descent was steep, but short and most of us were able to cross Mosquito Creek on a big fallen tree, keeping our feet dry.

Here, we met Jen and Marika who were planning to camp with us for the night. In true trail angel form, they brought positive election news for us and goodies to celebrate. Around the campfire, Dmitri regaled us with his Haunted House stories and how much joy he got out of it. Unfortunately, a minor injury was bothering him, and to avoid further strain, he decided to bow out from the rest of the trip. The campsite here turned out to be one of the most spacious ones on the whole trail.

Again, we woke to near freezing temps in the morning, this time waking up to somewhat icy condensation on the shelters. We said our goodbyes and thanks to Jen and Marika. We warmed up immediately on the steep climb out of the valley and enjoyed some of the flat miles on the top. A steep descent led us to Upper Three Runs and the climb out through Laurel Swamp Draft was also steep and short. Atop, Kylie, DOC and I ran into a large group of horse riders near Three Runs Lookout Tower. Zak missed seeing the horses, but thought he heard something and was a bit disappointed to learn it wasn’t a wild animal. At the top of Lower Three Runs, we took a lunch break at a campsite next to the piped spring. I found the spring, which flows through artfully created nooks in laid, connected trees, surrounded by vibrant green moss, to be very beautiful.

The next few miles involved climbs – the terrain was noticeably less flat than the day before. We descended down to Upper Jerry run and climbed out of it. Thankfully, we were on the ridge for a short period in the sun, and descended again down Upper Pine Hollow. We saw two day hikers starting from their cars at the Wykoff Run Road. Then, we started our last major climb of the day next to Laurel Draft. We found water flowing at the top where the trail crosses the creek and tanked up here anticipating little or no water camp. A few miles later, we arrived at camp – Arch Springs – just before dark. The stream was dry at the top, so tanking up was the right call. There are only a couple of flat spots here, so again, having a hammock majority helped us. The firepit is surrounded here by the remains of an old cabin (?). We really liked the spot. There was soon a fire going and DOC was cautioning everyone to avoid ‘the pit’ (not be confused with the ‘the pit of doom’. Dinner chat focused mostly on what was going to come out of ‘the pit’ in the middle of night.

Folks were up and ready to hit the trail early the next day. Everyone confirmed hearing the coyotes yip and howl at night. At around 40-45 degrees, it was also our warmest night yet. The morning light backdrop against a dense patch of birch trees was really nice. We passed the large open field which was our backup campsite. The miles flew by initially, but we all felt that long climb out next to the Porcupine Draft. On a forest road, we passed by a hunter (we saw a few of them over the weekend). We passed by a view and then the trail shot straight down along Deible Run. The hike along Mix Run was really nice and populated with many small bridges over the run. We took our lunch break at a picnic table right next to a cabin. In general, we were all hiking at a pretty similar pace and it was nice to regroup every few miles.

The climb out was relatively gradual, and was followed by a few flat miles on game lands atop. The trail then led us to Silver Mill Hollow. I missed getting water here, not realizing that the trail was going to start climbing to the side of the mountain. In this stretch, I was also treated with the sight of at least 30-40 Turkeys climbing uphill, probably just to avoid my hiker smell. At the crossing of the Quehanna highway, I skeptically got water in case the water source a mile away was dry and I was really glad that I did. After a hilly stretch, the trail crossed Medix Run for our final climb of the day. At the top, we passed the dry, originally intended campsite, and came across a nice, small site right next to a stream. You could probably fit 3 or 4 tents here, but no more.

Camping here also helped us achieve our goal of hiking 3 back to back 20 mile days. As we were setting up, we were joined by Pete from the Mid State Trail Association. This is the third time I have been on the receiving end from Pete’s trail angel visits and it made my birthday more special. What a guy! Pete gave us company for a bit around the campfire, but had to leave for a meeting. We bid him adieu and turned in after sumptuous dinners. A backpacker passed us in the dark just as we settled in our bags.

With only 6 miles left and the Knickerbocker expected to open at 11, we tried staying at camp till 7:30 the next morning. It turned out to be more difficult than expected and in the end, we left a few minutes before the intended time. We passed by numerous campsites at Saunders Run. Pretty soon, we were at Parker Dam State Park. Victory! We reached Knickerbocker just as they opened and were soon enjoying food and beer in the open space at the back.

Per caltopo, our splits worked out to be ~2, 21, 22, 22, and 6 miles. Here’s the plotted route: https://caltopo.com/m/B05A Congrats to everyone for hiking three back to back 20s, and congrats to Jim for earning his first DCUL ‘(3)’ and becoming a Veteran Plus Member. I am tempted and optimistic that this will become a recurring post election, Veteran’s day DCUL tradition (we’ve got it two times in a row now). Someone – I forget who – asked my thoughts about the Quehanna Trail. I thought it was a classic PA trail that just gets you lost in the woods and I really appreciated that. And when you add awesome weather, an amazing group and two trail angel visits to it, the trip was pretty perfect!