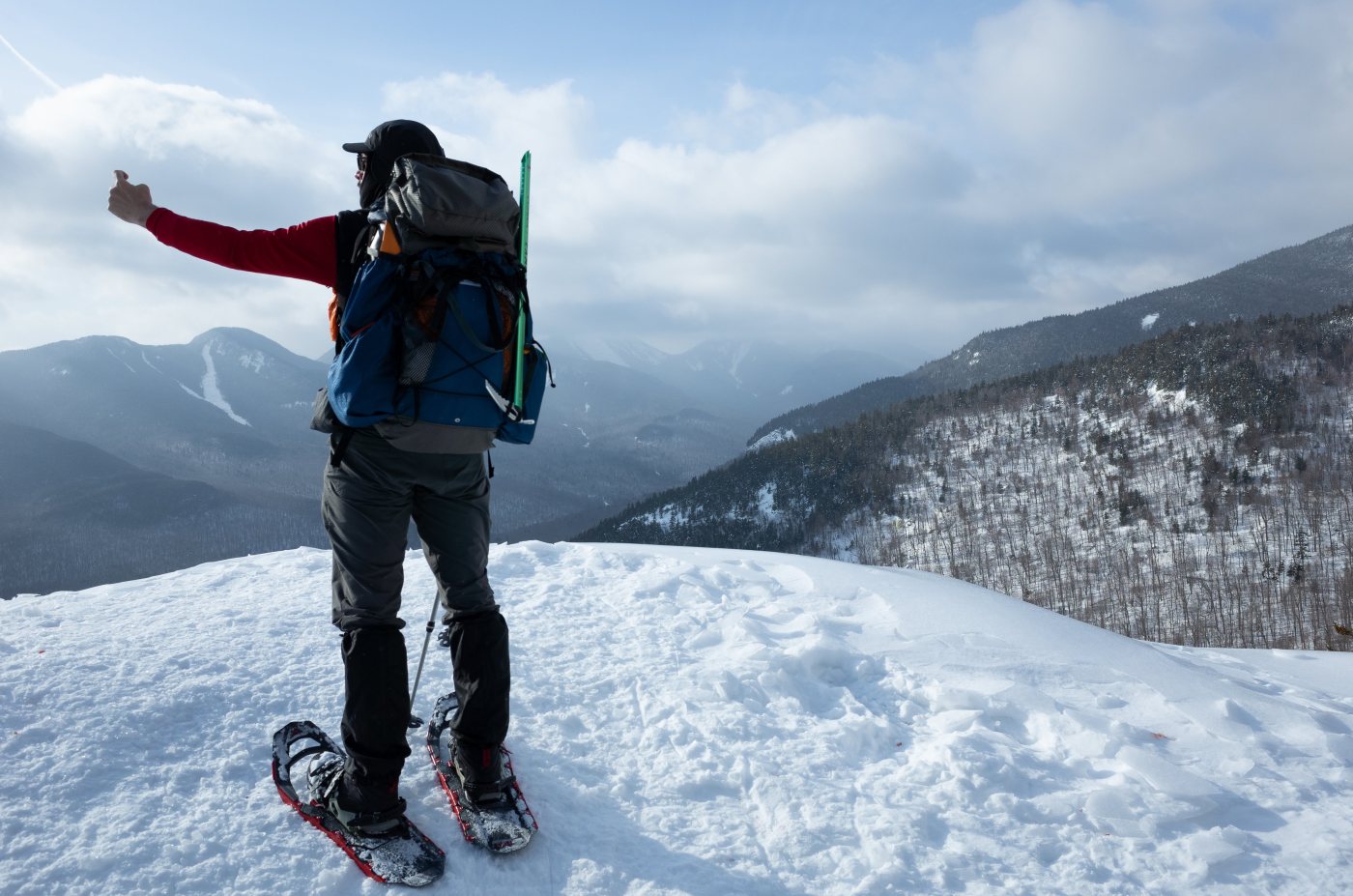 A link to the original trip: https://www.meetup.com/DC-UL-Backpacking/events/266433872/feedback/?_xtd=gatlbWFpbF9jbGlja9oAJDI5N2JkNTZhLWY4ZGEtNDQxNS05NTRhLTI1YzdhZGIxZGNmMA&_af=event&_af_eid=266433872

A link to the Google Photo Album:https://photos.google.com/share/AF1QipMndMvNWTPdeiAZ7zc7SpRIqZ_ve-3l17nfPmdi61A0ZfRviIrqNUGqm3QUGm5tQQ?key=a1E1emtOeVVRNm83MWJILWtva1NnUjRiY0R6dzh3

My motivations to get more involved in DCUL trips like this W3 stem from those fairly common desires to move, challenge ourselves, and connect with the world. Andrew’s trip to summit Esther and Big Slide Mountains (two of the 46ers, all of which are over 4k’, for the unfamiliar) sated those appetites more than our group’s two Sri Dosa visits and three Noonmark Diner visits even did.

Andrew started organizing early, ensuring gear readiness and communicating consistently about the group’s preferences, logistics, and answering questions. Since we were six, we took two cars, meeting up at an Indian Dosa place in New Jersey that set the tone for a weekend of some serious eats. Fast forward five hours and we met up again, this time at Noonmark Diner. Our server names us her Thursday night rush. The maple walnut pie is crazy good, and Andrew and I put in orders for whole pies we can dream about for the next two nights. Steve’s S.O. put in an order over the phone, and made it clear to him that the price of his admission back home was nine Noonmark pies.

The trailhead we ventured out on that night, only 20 or so minutes from the diner, starts just a few steps from the town of Wilmington’s water treatment facility. Its name? Wilmington Trail. That’s OC right there. We only needed to snowshoe a quarter mile or so before Andrew scoped a solid spot for setting up camp, and Peter and Brian A took advantage of the proximity to pack in a few more creature comforts.

Contributions to group gear, including shovels and stoves, made setting up and operating well in 1-3’ of snow work pretty well. On our first night, Thursday, clear weather brought temps down to the negative single digits. We emerged at the night’s coldest around 5 a., boiling water for coffee, breakfast, and the 3000’ climb beckoning. Consistent communication about logistics and options for the hike across the team gave me great confidence for the day. The sun rose rosey.

On went the Scarpas–an Italian brand I’ve come to realize does not share Altra’s philosophy on toe-spreading,–on went the snowshoes, and off went the DCULers, up the Wilmington Trail to Marble Mountain. On the way, I distinctly recall the depth of the cornflower blue sky being impossible to recreate artificially. The nerves in my toes rejoiced as I worked up the day’s first sweat, reaching up to that beautiful blue.

Wilmington continued up to Lookout Mountain, and we passed by a tiny little roofed structure nigh buried in the snow that I swear someone told me was for toboggans, but I think could just as well serve tiny mountain gnomes. North on Esther trail brings us to a lookout, but I’m invested in the main event, continuing onward and upward to Esther Mountain. We cross paths with a few post-holing hikers in crampons, earning chides from Steve and Andrew, whose pithy retorts to weak excuses for no snowshoes give us a laugh. We continue with our ADK-recommended snow suspension devices up the trail.

The wind really picked up as we reached the summit (4,239) around mid-day. It’s my third 46er, Andrew’s 40th, and Brian A’s 44th. We revel in the brilliance of it all and enjoy a snack. Grateful for the group’s generosity, I cozy up in a borrowed parka and Brian H’s second pair of pogies, Yama’s gift to mankind. As we head back from Esther, the rime ice (knowledge brought to you by Andrew) growing from the trees catches our attention and I, once again, feel #blessed to suck air and sweat and swear at my boots.

At the junction around 1:30 p.m. (~2,388’ elevation), we part with Brian A who takes on the challenge of summiting nearby Whiteface Mountain (4,865) before an agreed-upon turnaround cut-off at 3:30 p.m.. It turns out he blew our group estimate of his return to camp out of the water, striding in at 4:30 p.m.. He reported strong winds in the Alpine zone (30-40mph, and a weather report at one point said 60mph). Perhaps he brought some of the frigid air with him, because his fuel canister was stuck closed, preventing some fielding testing of his new stove. Three others help boil water, though, and we retire early for an early wakeup to break camp and breakfast at the Noonmark.

Our early dispersal from camp is well-rewarded with Noonmark’s finest, breakfast and more pie. I couldn’t recommend raspberry more. We meet the pie baker, the woman holding Steve’s future in her hands, who apologized for a small mix-up in Steve’s pie order requiring a later return for pickup. Steve would be homeless if not for the successful acquisition of all nine pies ordered, so what Pie Lady says, goes.

Our next trailhead greets us just in time, where we land two parking spots 15 minutes before the lot fills up. We venture up a scenic trail to the Three Brothers, a panoramic triad linked by some heartrate-boosting ridges. Just beyond that, we eyeball our goal, Big Slide Mountain (4,239’), which will grant us views of Giant to Mount Marcy after a ~2,800’ climb. On the .3-mile climb up, Steve was almost impaled by a descending hiker’s pole. We jokingly speculated later that the hiker likely was never in the Boy Scouts, as he’d otherwise have yielded to the ascending hiker.

Spirits unpunctured, we all enjoyed the view looking east to the Gothics. We even got a fellow hiker to get a full-group photo. The highlight of the day, though, is breaking trail in powder between two and four feet deep as we traverse to Yard Mountain and then John Brooks lodge. Rotating as lead, we all struggle up and float down, and pass the next three hours in strugglebus bliss. Andrew caught his snowshoe under a large deadfall while leading, and Steve was in turn trapped by four feet of snow when he went to retrieve Andrew. Andrew managed to get loose from his minor cedar trap and wrested Steve free. The rest of the group enjoyed the live comedy from the safety of our patted-down trail.

Soon thereafter, we found yard mountain and started working our way down to John Brooks lodge. At times, the trail was open and easily navigable, allowing us to float down relatively effortlessly. My knees rejoiced. At some points, though, steep ledges and ice walls required a bit of precarious maneuvering. Timing each quick descent was important to avoid being bowled over by those behind and prevent pileup onto those ahead. None of this was stated, of course–operating as a cohesive team, we got into that mode where words aren’t necessary so much as moving and reacting assertively to steadily lay out trail.

There was a point, though, where we ground to a halt. Gear failures are a fact of life, but they’re truly inconvenient when you’re at the far end of a powdery mountain circuit. One of my snowshoes suffered a small broken plastic part, rendering the entire binding inoperable. Frustrated by my misfortune and apprehensive about how I’d descend the rest of the mountain, six miles from the car, I moved as quickly as I could, falling behind each time I dropped through partially-packed trail up to my hip. Thankfully, the group stopped only a short way ahead, and my organs rose back up into my chest as the guys brainstormed a quick MacGyver for my broken snowshoe. Brian H managed to strap the binding closed, and I promised to holler if anything else failed. Another moment of solidarity–two of the teeth on one of Brian’s snowshoe snapped off, reducing valuable traction.

On we went, enjoying beautiful rock formations and frozen falls. Breaking trail had involved quite a bit of route checking up to that point, but this time produced no trail marker. We opted to “bushwack”, following the natural topography gently downhill to where we knew our creekside trail would lay just ahead. We soon met up at John Brooks lodge and set off to cover the last 3.5 miles along the “crick” in record time. 1.5 hours through the Garden and we were back at the parking lot.

Our last rendezvous with the Noonmark redeems Steve, and he walks out the door at the end of the night with nine boxes of pie. I enjoyed my last slice, a peach cheese pie. If peaches & cream and pie had a baby, it would be that pie, and I would adopt it as my own. Ready to fall into food comas, we shuttle down to Glen Falls for a warm night in a hotel.

Morning brings coffee and a return to Sri Dosa. By this point, we figured that we ate out once for every four miles snowshoed. I still devour my delicious Indian pizza. I had no idea what butter tomato Uttapam was when I ordered it, but I do now.

Aside from maybe a couple pounds, I gained an incredible amount of knowledge, some valuable experience, and unforgettable memories with new and old friends on this trip. One of the things I love about this group is that I can do the exact same thing next weekend, and I plan on it. So long!