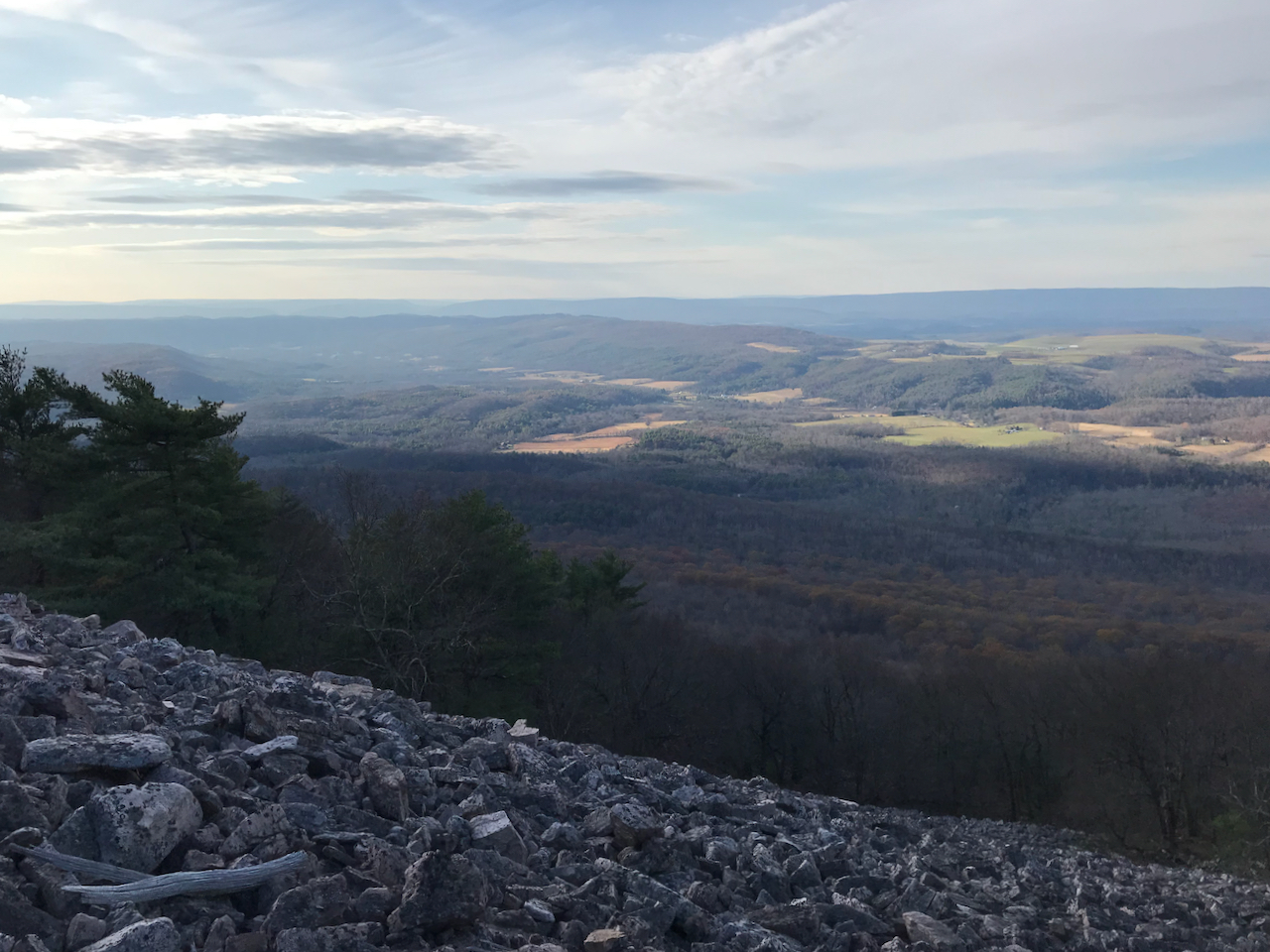 The north half of the Standing Stone Trail is a challenging trail with great views and very little road walking. Some of the mileage was slow-going because of rocks, but as long as you are expecting that, it’s a very enjoyable experience.

There were two people signed up for the trip and only one car, so we were dependent upon a way to get between the beginning and end points. After posting on an SST Facebook group, a friend came through and offered us a ride from the end to the beginning on Saturday. (Thanks Pete!) Not long after noon, we were headed north on the SST from Jacks Mountain Road.

The Saturday plan called for about 14 miles, and given the late start, that would be difficult to accomplish before dark. Bryan is a fast hiker, so he opted for the side trip south up to the Throne Room. On our previous SST hike that would have included the Throne Room, the weather was bad (rainy and foggy) so this was a chance to see what was arguably the best view on the SST.

I started north up the fire road, took a quick look at Windy Vista, and then headed down to the town of Mapleton. Soon after, I was climbing the Thousand Steps (slowly, of course) as the sun descended in the sky.

I passed the Dinkey House around sunset and proceeded by Mill Creek Quarry in the dark. There was a hint of light on the horizon that made for a spooky view as I made my way up to Shorbs Summit. After seeing the glinting eyes of nocturnal animals, including a possum and a deer, I started looking for a spot to camp. There were plenty of flat spots once I crossed into the southern part of Rothrock State Forest. I set up my tent in the dark, and Bryan arrived about an hour later. We both commented on how much harder it is to follow the trail in the dark, but once we were set up and fed, it was a comfortable night in the mid 30s F.

The next morning, we got started around sunrise and quickly realized we were very close to the Shorbs Summit overlook.

After passing Shorbs Summit, the trail headed back downhill, across highway 655, and into State Game Lands 112 for a relatively gentle trek toward Rocky Ridge Natural Area. By the elevation profile, it might look like easy going, but as the name would suggest, the terrain in Rocky Ridge limited the pace. Before heading downhill from Rocky Ridge, I took a lunch break where Bryan caught up and we discussed the rough plan for the rest of the day.

It was a long climb back up across Allensville Road to Stone Mountain and a series of spectacular views, including Hawk Watch, where I saw a bird-watcher recording hawk sightings. We talked a little about the the organizations that record bird activity, and then I proceeded northward along the SST, hoping to make it to Turkey Trail before dark. 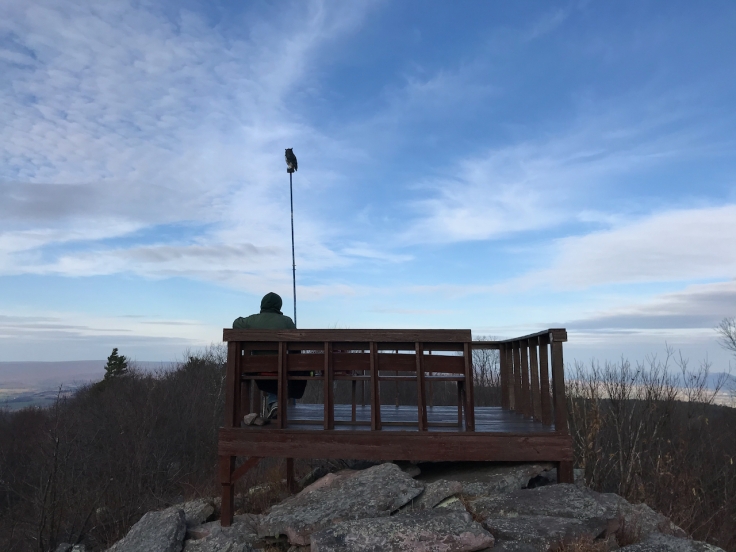 A few miles later, I realized that I was missing a water bottle (oops!) at the same time I met a local and stopped to chat. He owned nearby land and thought he could help keep the trail clear, which I strongly encouraged, as it was a rough stretch of trial with its share of blowdowns. I was hoping that Bryan had the water bottle, because if he didn’t, I was probably looking at three extra miles in the dark down to the next water source at Greenwood Furnace State Park. Thankfully Bryan did pick it up, yielding a sigh of relief from me.

We rock-hopped another mile and then opted for a fantastic view near a power line, even though it was a couple miles short of the intersection with Turkey Trail. We decided it was more fun to watch the light fade from our tents, not having to search for a flat spot in the dark. It was a relatively warm night, dropping only to about 40 F. 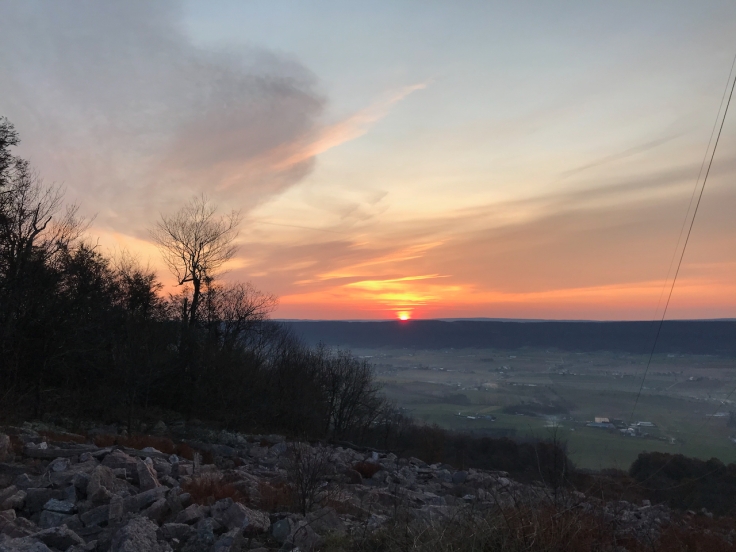 On Monday morning, it was only a mile or two, with some porcupine sightings, before the trail started its descent toward Greenwood Furnace. I didn’t bother checking the doors at the ranger station to see if they were open on Veterans Day, but Bryan mentioned later that he saw someone go into the building. No matter though. I refilled my water bottle at the creek and proceeded up the hill toward the Greenwood Furnace Fire Tower.

Once the climb was done, I delighted in the downhill trek toward the beautiful Alan Seeger Natural Area, abundant with green foliage and crisp water sources.

Soon afterward, the trail merged into Detweiler Run, passed by some excellent campsites that I remember from previously hiking the Mid State Trail, and climbed back to the intersection that led to the car. 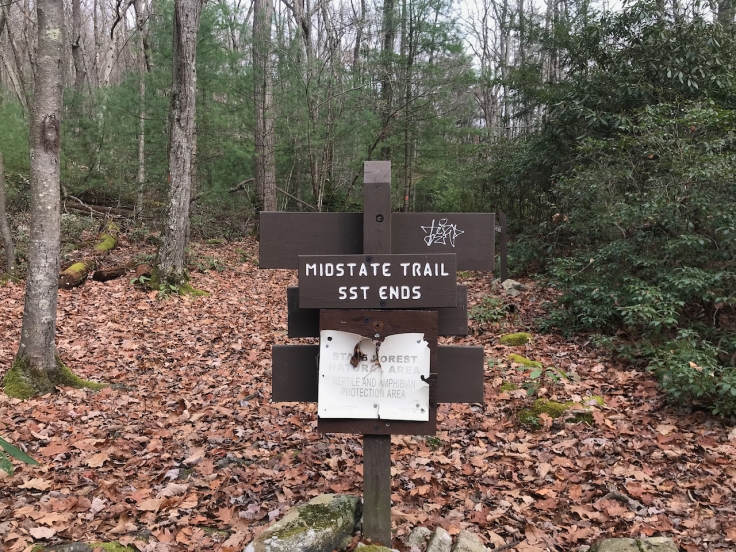 We drove an hour to Pizza Star II in Three Springs, salivating the entire way. I remembered that the stromboli was big, but I didn’t recall just how enormous it was. I had an indulgent lunch there and enjoyed three more lunches from that one stromboli later in the week. Bryan polished off some pizza and a large portion of chicken parmigiana, but left with a doggie bag as well.

Trip stats (not including side trips to viewpoints):

#tbt to the #TuscaroraTrail just a few weeks ago.⁠
It's #TripTuesday! Last weekend, we took a 71 mile trek on the #MassanuttenLoop.⁠
It's always exciting to find non-traditional stream crossings, like this one on a 2019 trip to the Lost Turkey Trail.⁠
Our #DCULbackpacking Meetup is for everyone, from the casual weekend backpacker, to the backpacking beast, the naturalist, the photographer, the gear junkie....⁠
#tbt ⁠
It's #TripTuesday! Here's a recent trip to fan favorite #OldRag and other environs.⁠