This trip was centered around a permit that Erik’s PCT buddy Brian (Patches) managed to get; 3 DCUL’ers from Seattle and DC (myself, Kyle, and Doug) ended up joining Brian with varying degrees of last minute planning. Many of us were meeting for the first time on trail, but the beauty of long distance backpacking is that these oddball groups always seem to work out great.

The Wonderland Trail runs for 93 miles around Mt Rainier, climbing about 20,000′ in the process. You apply for permits well in advance, with all your campsites preset. There are walk-up permits available, but it’s not guaranteed and you have to be more flexible. People typically take 8-12 days to hike it, but we did it in 5 (Thu evening walk in thru Tue ~noon), with ~18 mile days and climbs of 5-6k’ each day. We found it to be challenging but definitely doable; I’d say DCUL Veteran Members should feel comfortable following a similar itinerary.

Thursday night, we all met up at the White River front country campground. Doug drove straight there and picked up our permit when he arrived; Kyle, Patches, and I hiked in from Fryingpan Creek trailhead about 2.5 miles down the trail after having met up in Seattle and picked up our rental car. We enjoyed the remnants of a campfire and set a start time before heading to bed.

Friday started with a big climb, gaining 2500′ in the first 5 miles, switchbacking up through a pine forest before breaking through the tree line. Most of the trail was like this: up through the forest until we traveled through rock, snow, or alpine meadows, back down to a big river crossing (always with a bridge), just to go right back up again.

The trail tended to be fairly wide and well maintained, except for a couple overgrown sections, and we were impressed with all the “amenities:” flat log bridges (with handrails!), pit toilets and bear poles at each campsite, and good signage. This first climb had blazes way high up on the trees, and we assumed they were for snowshoe-ers in the winter.

We didn’t have too many views of Rainier on our first day, but a lengthy (and cold!) walk above treeline, lunch at Mystic Lake, great views of Carbon Glacier, and an awesome suspension bridge more than made up for it. We met a lot of thruhikers going the opposite direction; it seems like clockwise is more popular. We enjoyed chatting with them and hearing what was ahead and how they were handling the hike. On our last day, we ended up seeing a lot of the same faces – it was fun to recognize each other.

On Saturday, we decided to take the Spray Park alternate route rather than go through Ipsut Pass. I’m sure it would’ve been beautiful, but Spray Park gets you closer to the mountain with better views (not blocked by Mother Mountain). We got up there early (earlier than all the dayhikers coming in from Mowich), and had the summit to ourselves (except for a family of mountain goats). This was our first real view of the mountain from up close, and we were blown away. The vistas on the other side (to the north) nearly rivaled Rainier, with huge snowcapped mountains as far out as we could see.

When the peak started to get crowded, we headed back down towards Mowich. We were surprised to see several people climbing up with downhill skis and boots. It seemed like an awful lot of work for an awfully short run. Back on the Wonderland, we had a bit of trouble finding the trail as it crossed through South Mowich basin, but flags and streamers helped mark the route. The route and crossing must change at least once a year, depending on how the snowmelt changes the landscape.

A steep climb brought us up to Golden Lakes campsite; it was definitely the most striking location that we camped at. Just below 5000′, our site was backed by Mount Rainier and looked west over a cliff where we could see the southern end of Puget Sound and the Olympic range, silhoutted by the setting sun. We stayed up far too late enjoying the view, taking photos, drinking whiskey, and stepping carefully over all our crossed guylines (the individual sites are definitely not meant for 4 tents; I’d say 2-3 at most and even that would be a squeeze in some sites). 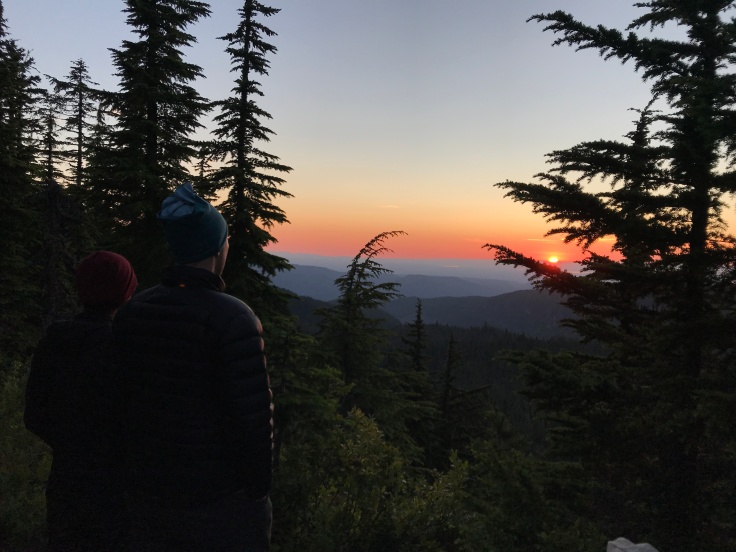 To mix things up, Sunday started by going downhill first, before climbing back up through Saint Andrews Lake (we saw bears! Kyle swam! the mosquitos were awful!) and the Emerald Ridge, which knocked my socks off. We chatted for a while with a ranger who’d worked for many summers at Glacier but recently transferred to Rainier. On the one hand, how could you give up Glacier NP? On the other, he’s based at this patrol cabin:

Even though Sunday was our hardest day (19 miles and 5900′), we still got into camp (Devil’s Dream) around 4. I wouldn’t recommend a faster pace than what we did unless you’re like Patches and doing this as a vacation from a thruhike, but you should be prepared to spend a lot of time in camp. We could’ve dragged out our breaks longer, but the sites were so small to begin with that we didn’t want to show up late and be stuck with an unworkably small site. Our early arrival was especially frustrating on Sunday, when we couldn’t comfortably be outside our tents due to the bugs. We set them up so we could mostly still see each other, and spent the next 5 hours chatting and telling stories.

Compared to the rest of the trip, Monday was a bit underwhelming – the Wonderland Trail spoils you that way and raises your standards to unreasonably high levels. We went to the restaurant at Longmire for a pretty decent second breakfast around 9, and dawdled in the gift shop and information center until nearly 11. We were set to camp at Nickel Creek, with a higher mileage day but comparatively low gain. Most of our trail this day stayed close to a main road, which meant lots of dayhikers and people climbing out of their cars to take photos from the parking lots. There was one washout just after Stevens Canyon parking lot that was a bit sketchy, and a confusing trail reroute around Box Canyon. We were excited to get a bit further away from the crowds, but it was bittersweet setting up for our last night on trail.

Our last morning started like the first: with a climb. We woke up early and were on trail by 6am. It was so nice to have saved this section for last: the stuff we’d seen earlier was good, but today blew it all out of the water. Full 360* views, with Mount Adams to the south, countless smaller mountains stringing up to the west, and sweeping views of Rainier and her shoulders. We could just spot a couple climbers and wondered if they’d be deterred by the snow clouds brewing over the peak. The views stayed stunning all the way down into Indian Bar; if you’re hiking clockwise, be sure to look behind you as you climb out here!

We briefly lost the trail coming out of this river valley and bushwhacked a bit to get back on route before starting our last climb of the trip. I fell to the back of the group to have a snack, only to have an otherwise lovely older couple tell me “Good job!! I’m so impressed you’re keeping up with all those guys!” Oh well. That said, Doug and I did have trouble keeping up with Patches and Kyle through the snowy sections before Summerland – the two of them were booking it this whole last day. There was a fair bit of snow up here, but there was plenty of boot pack and it was easy to get good footing. No need for microspikes, and plenty of opportunities to glissade down.

Summerland brought us the end of the rocks and snow, a gorgeous alpine meadow, a return to forest switchbacks, and one last sighting of marmots that were supremely unconcerned by our presence. It’s only a couple miles uphill from Fryingpan Creek to Summerland, so a lot of people come in to dayhike up for the view – we were pulling over constantly to let people pass by on their hike on through these miles. In a funny coincidence, Doug and I ran into a couple that we’d encountered on our Enchanted Valley loop a couple months back – they recognized us, and also realized they’d seen Doug on an earlier hike as well. Small world of hiking!

All too soon, we were back at Fryingpan Creek trailhead. We took an end-of-hike photo and said our goodbyes; Doug had a few more miles to complete his thruhike, while Patches, Kyle, and I headed back to the car. We were unpleasantly surprised to find a mouse had gotten into the trunk and eaten some bars we’d left behind, but fortunately the car started fine. In true DCUL fashion, we stopped for burgers and beer before dropping the rental car back off in Seattle.

Thanks to Patches for welcoming us on his permit, and cheers to Doug and Kyle for saying yes on very short notice to a challenging trip! We couldn’t have been luckier with the weather, and the scenery and company made this trip especially memorable.

One thought on “Wonderland Trail”

Tell us, are you starting to see fall colors on the trail? Share them and tag us!⁠
Are you ready for the weekend? Rain or shine, here we come!⁠
We have fun!⁠
Are you ready for the weekend? We sure are! We couldn't BE more ready.⁠
Come test your gear with us on one of our low mileage trips! You can find low mileage (LM) trips on our event calendar.⁠
Are you worried our trips will leave you wiped out? Worry no longer! Our backpacking events are often followed by trips to local restaurants and breweries (totally optional, of course). We know all the good places!⁠