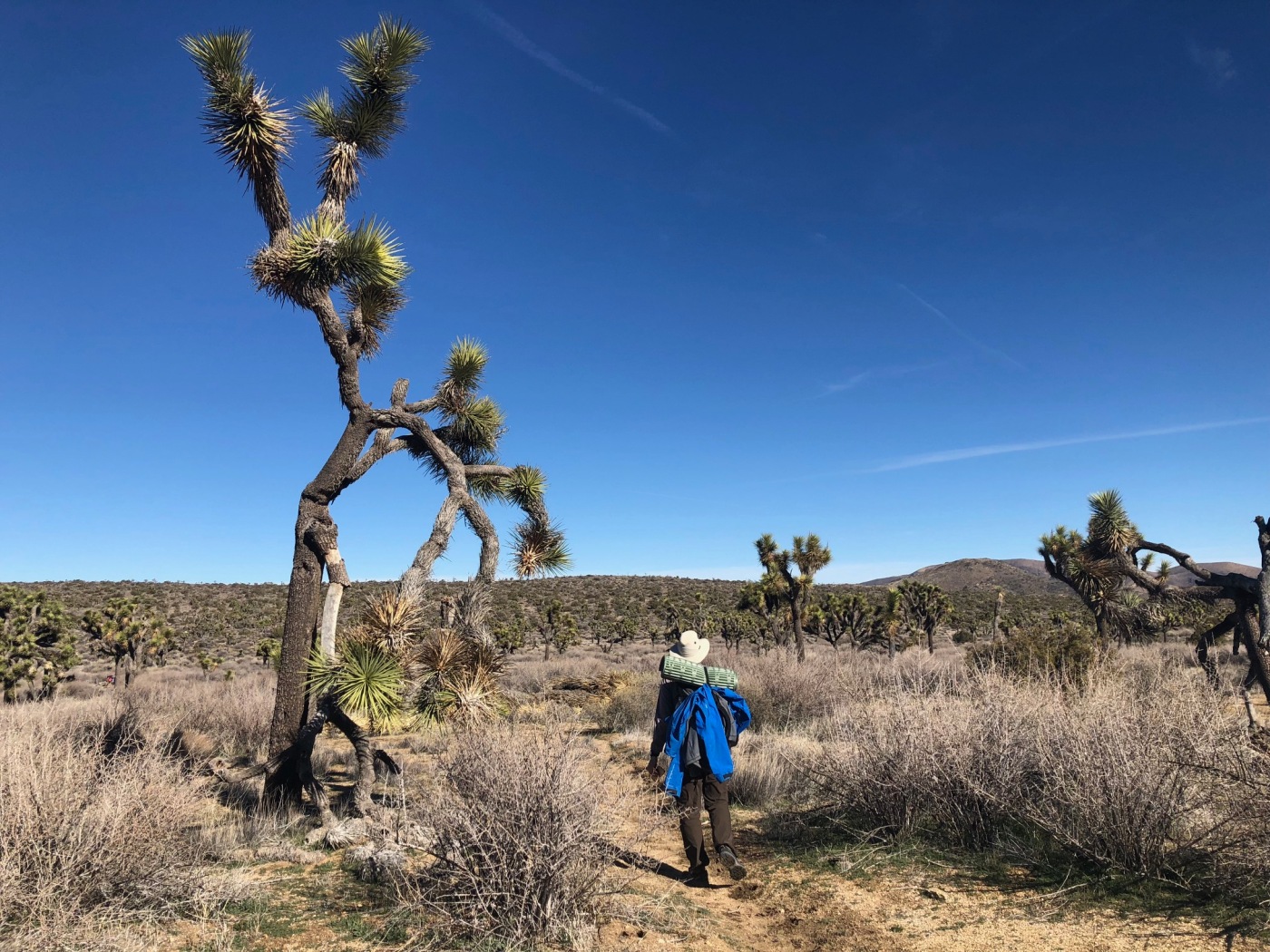 If the reload button in Google Chrome could talk, it might tell you that I spent the first three weeks of January feverishly refreshing the pages for Politico and for Joshua Tree National Park. “It won’t last that long,” said Michael and I to each other when the government shut down. It would be over in just a few days–probably by the beginning of January–and that would be that.

Instead, we found ourselves getting ready to go to a national park that became a prominent fixture in government shutdown news. Stories emerged of toilets overflowing, Joshua Trees being chopped down, and new roads being formed as people drove off trail. Roads were closed, some trails were closed, and the park itself almost closed. The campsites I reserved for the first and last nights were canceled. With each update, I stared at the map to figure out the impact on our planned route–let’s just say that I had it memorized at one point.

We had a planning call scheduled for the Thursday before our departure, just a day after the park first said “we’re closing” and then said “nevermind, staying open” all within a 24 hour period. Michael and I–and others in the group, I’m sure–had gone over whether or not we should cancel given all the uncertainty. I came rather close to canceling it outright, but Michael and I decided to plunge ahead (a glass or two of wine might have fueled the final decision on my part).

So on we went–and it was a beautiful and enjoyable experience. I used a route from Lady on a Rock as the starting point for the trip, but I made some adjustments in the initial planning since I wanted to explore a few other trails. Michael, Aileen, and I headed out early on Thursday to purchase water and set up caches along the route. We planned for three caches — six gallons at the first one, six gallons at the second one, and then three gallons at the last one — which worked out well for our purposes. We met Andrew and Doug at the Joshua Tree Saloon (excellent spot!) and then headed over to the backcountry board at the Boy Scout Trailhead. Our destination was the Big Pine Trail for our first night’s camp. It got cold quickly once the sun set, and Michael and I scurried to our sleeping bags.

Day two, we continued along the Big Pine Trail and then picked up the North View Trail, which had amazing views of the valley below  Then, it was off to our first water cache. From here, I planned a diversion from Lady on a Rock’s route, since I wanted to check out Samuelson’s Rocks. John Samuelson had carved a manifesto of sorts into the rocks–the legend goes that he was shipwrecked, kidnapped, lived in the U.S., got sick and was sent to the desert to get better, worked on a ranch, carved his manifesto, and then may have killed a few people. The rights to his story were purchased for $20 by Erle Stanley Gardner of Perry Mason fame. So it was worth a stop to explore the rocks and see if we could spot all eight “desert tweets” as people have come to describe them.

Now our first cross-country challenge awaited: Smith Water Canyon. The GPX file from Lady on a Rock was spot on, although we quickly learned that we were going up canyon rather than down canyon. The hiking was easy, with some bushwhacking through trees and scrubs, and we quickly arrived at our first obstacle, a 20 foot dryfall with incredibly smooth rock. Aileen made the first attempt to climb, then Doug, then Michael–getting a grip on the smooth rock was a challenge. Aileen took off her pack and had a successful second attempt. Doug scrambled up partway, as did Andrew, and then we formed a chain to pass all the packs up the dryfall.

Now I am not known for my scrambling skills. I tried to follow Andrew’s path up, which had a pool of water midway up, but it appeared to have more options for footholds. I still struggled so Michael gave me a boost from behind while Andrew and Doug tried to help from above. Let’s just say that at one point I was in a perfect plank position with my head hovering above the pool of water. A few more heaves, and I was to the top.  (And if you do find yourself doing this and happen to find my dignity at the base of the dryfall, please feel free to bring it back.) The rest of the canyon featured a few rock scrambles, and we made our way out and to the California Riding and Hiking Trail where we set up camp for the night.

We debated at dinner our plan for the next day. Lady on a Rock’s route included a climb to Quail Mountain, but she then descended towards Johnny Lang Canyon. We wanted to extend the route an extra day so would need to descend a different way. From the map and our vantage point, we weren’t seeing an obvious way to do–so the decision was to either do Quail as an out-and-back or do the alternate route along the California Riding and Hiking Trail to the Stubbe Canyon loop before arriving at our second water cache. We opted for the alternate, and it was another good day of views–about 16 miles for the day.

We discovered, however, that the map had a few flaws. I had pushed off ordering the USGS maps for the area, and then wasn’t able to order them once the government shutdown so we were relying on the National Geographic map for the area. The first issue was that the Stubbe Canyon loop didn’t quite match up with the connector trails–not a big deal since the signage was clear. The second issue was that the Johnny Lang Connector Trail didn’t actually exist–as did the trail through Johnny Lang and Ryan canyons, which were both depicted on the map. It wasn’t a big deal for us as we had GPS files for the entire route but we thought this would be more problematic anyone less experienced who would have purchased the map and then used it to plan a trip. Or, as Doug joked, we still haven’t found the trail we were looking for.

We set up camp near the entrance to Johnny Lang and enjoyed a glorious sunset. Then it was day three–our last day–and we scrambled our way into Johnny Lang Canyon, which was a fun canyon to explore, and then into Ryan Canyon. For a day that we thought we’d be on trails, it was a fun surprise that it wound up being more of an adventure to navigate the canyons.

From there, we made our way to the last water cache and then back to our car, opting to take the Boy Scout Trail rather than Rattlesnake Canyon. The Boy Scout Trail was smooth sailing, and we arrived at the cars just in time to get back to the Joshua Tree Saloon to see the start of the Patriots-Chiefs playoff game.

All in all, it was a great and challenging route and one worth doing. Doug recorded our tracks so we will have a full GPS file for the route. If anyone is interested in replicating this trip, my main advice is to make sure that you are comfortable and confident with hiking off trail and with using a GPS and compass to navigate. Plotting the route in advance with Caltopo or a similar mapping program is essential. Since we didn’t get the USGS maps for the area, I can’t officially speak to them but I would suspect they’d offer good information for route planning–much better than the NatGeo map.

As for the shutdown and its impact, we saw minimal signs of what was reported–park rangers were on duty, and volunteers had been doing amazing work to keep the park and any open facilities clean and functioning. We did see where cars had driven around barriers, but did not see any cars doing that. Mainly, we saw people being respectful of the park and enjoying their time there. For us, the main issue was the uncertainty in the days prior to the trip as we were not clear on what would be open and what could be closed.

We managed to cover a lot of ground, but there’s still a lot to explore in the park. I’m looking forward to a return visit.

And kids out there, don’t forget your sunhat. If so, you’ll wind up looking like this: