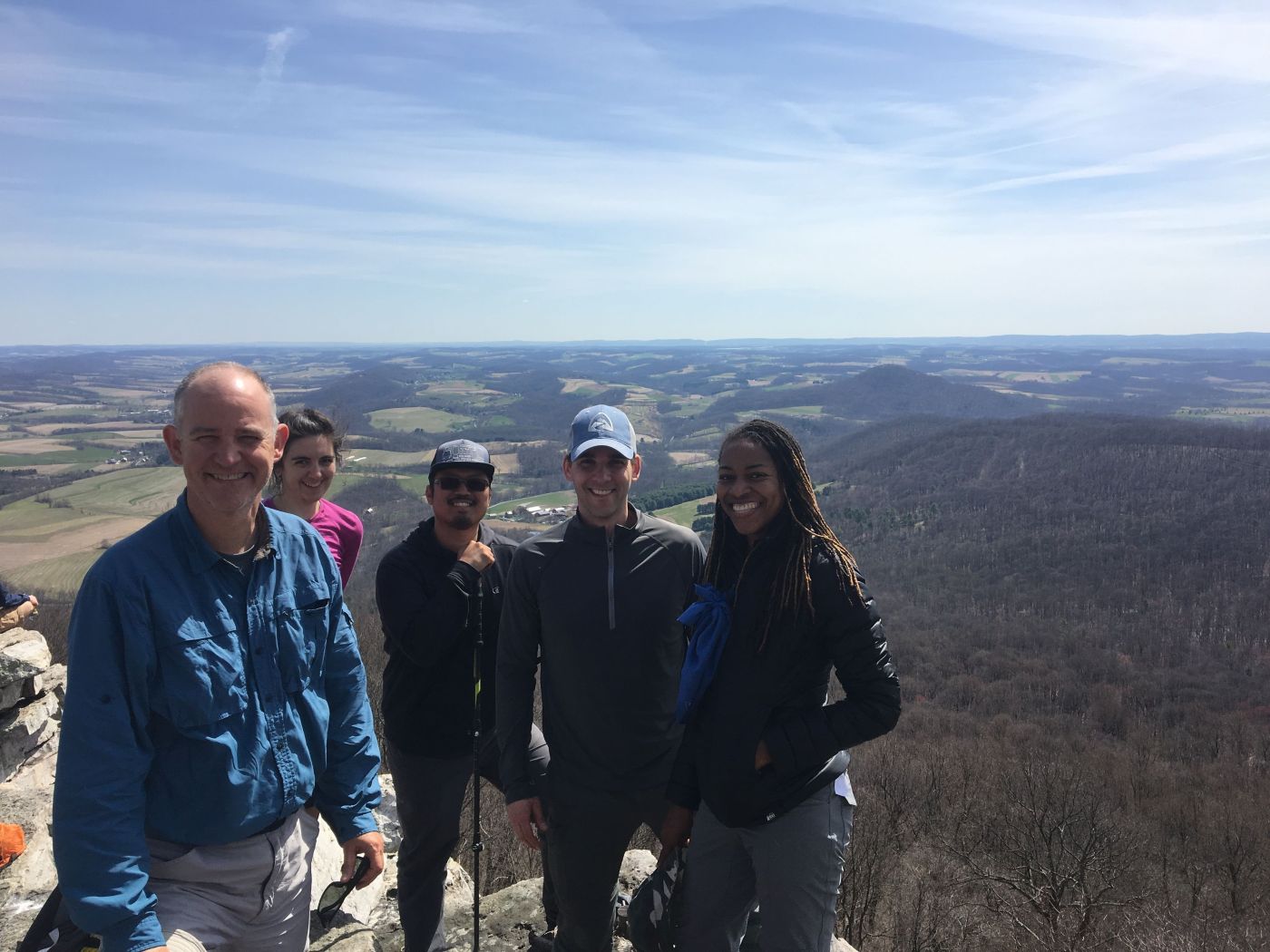 Everyone arrived at the trailhead around 9ish. Mark and Ashley hiked ahead to the shelter while Tania and I waited a few minutes for Adam and Mann to arrive. Once the gang was together we headed down the trail for a pleasant night hike to the Windsor Furnace Shelter.

Everyone settled in for the evening with Ashley, Mark and Tania in tents and Adam, Mann, a myself in the shelter. We were in for a cold night, Tania can tell you exactly how COLD it was! She woke up icy but wins the award for “Best Attitude After a Crappy Night Sleep!” Adam had a front row seat to a stereoscopic symphonic snore fest provided my Mann and yours truly.

It was an early and relaxing start with a quick trip to Pulpit Rock. There we soaked up some views and chatted with the locals. A hop, skip, and a jump, then BAM, at the Pinnacle! Lucky for us there is a small pile of rocks marking the side trail. Again some views, snacks and pictures. Mark and I did some spelunking and explored the cliffside.

The hike was going faster than expected, and Ashley and I thought a reroute would mix things up. Down a hemlock and rhododendron filled hollow to the Hamburg Reservoir. Ashley claimed a lounging rock in the sun for lunch. Next stop was the cars for a pack shakedown and some extra insulation for Tania. We followed a side trail from the lot area to reconnect with the AT. That’s where we stumbled on a sketchy abandoned cabin. Adam, Ashley and I did some exploring, Mann, Tania, and Mark stood watch!

The side trail seemed to go on farther than expected, but Mark was able to pinpoint our location with GPS. Once on the AT we continued to Minihanna Spring and Pocahontas Campsite. My plan was to hit an upper cut off to the Rattling Run trail, but plans don’t always work out! With Mann in the lead, fueled by thoughts of Bibinbap, he charged up the trail! After a 1/2ish mile l knew we had gone too far. We turned back and regrouped at Pocahontas Camp. I knew of an alternative spot a hundred yards down the mountain and we were home for the night!

With our shelters set up we ate and chatted around a fire. Everyone stayed warm for another cold night. The morning was laid back and relaxed like a Sunday should be, but the thoughts of burgers and fries were  enough to get us hiking. It was a short trip to the cars and off to the Port Clinton Hotel. The burgers and old bay cheese fries did not disappoint. Full and happy we all parted ways until our next hike!